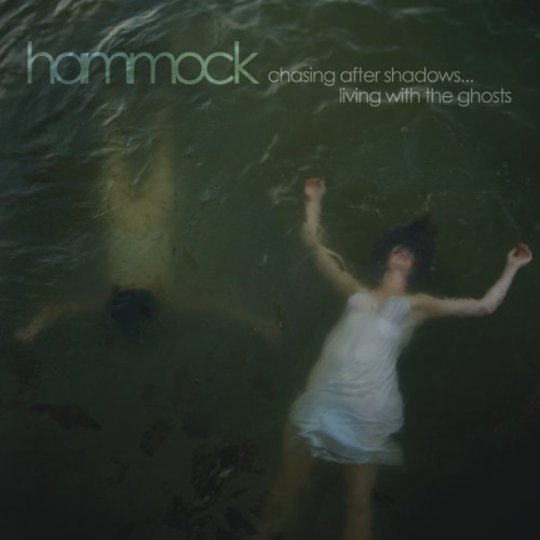 This may be important. Look at the cover of Chasing After Shadows…Living With The Ghosts, anything? A man and a woman, faces obscured, appear to be drowning in murky yet beautiful green water. If you know your way around an album sleeve, or maybe even if you don’t, it practically screams out cerebral, slightly dark, mid-paced guitar music. Hold that premise, and consider the fact that Jonsi from Sigur Ros designed the artwork for Hammock’s last album. Now, the percentage of people who are both mathematically and linguistically minded is small. I’ve long suspected there is a similarly small crossover population who are appreciative of mazy, arching post-rock things and, possibly more fashionable, two minute blasts of punk and garage rock. Clearly there is no science behind this; these are just some ideas that came to mind when listening to Chasing After Shadows…. To put it more simply, it is an album that brings to mind the patience often required to listen to this kind of ethereal, delay-heavy guitar stuff. If you need a song to get you somewhere in three minutes or less, it’s a fair bet that you will emphatically hate this.

Given the Sigur Ros connection (Hammock also performed their first gig at the USA launch of Jonsi’s Riceboy Sleeps) it doesn’t come as a huge surprise to find that Hammock’s sound sails fairly close to the atmospheric, TV trailer-friendly patterns of the Icelanders. Hammock are somewhat languorous in comparison to SR, though, certainly more so than the latter-day incarnation of Jonsi’s troops. It is on one hand to Hammock’s credit that they don’t try and force a path through to a soaring crescendo, and on the other contributes to the feeling that Chasing After Shadows… is pretty yet slightly unremarkable. Opener ‘The Backward Step’ sets the tone for this; it is a glacial slide, emoting past mistakes and recurrences, honest, unhurried and absolutely lovely. The similarity of what follows this motif is what lets the album down however. ‘Tristia’ is the most fully-realised track on the record. The addition of a (very slowly) syncopated 4/4 beat and high-register violins to the ever-present delayed guitars briefly threatens to elevate the track into the kind of places A Silver Mount Zion inhabit, but doesn’t quite kick on in the way our Canadian chums would from the same position.

The violins return to diminishing status and effect in ‘Little Fly Mouchette’, and from here is where Chasing After Shadows… starts to feel a bit samey. ‘Breathturn’ slightly changes pace by giving in to the urge to remove any point of difference between Hammock and Sigur Ros. It’s still not a bad track by any means, but it has to be said, it sounds A LOT like SR, right down to the breathy and meaningless lyrics which float on during the chorus. Perhaps the biggest frustration on this album is that more use isn’t made of the strings. When they do come to the fore, the arrangements are excellent. ‘The Whole Catastrophe’ is gorgeous and brings to mind the modern classical style of Max Richter, unfortunately it doesn’t arrive until track seven of 12, by which point the dye of the album has rather set, much like your thoughts about it.