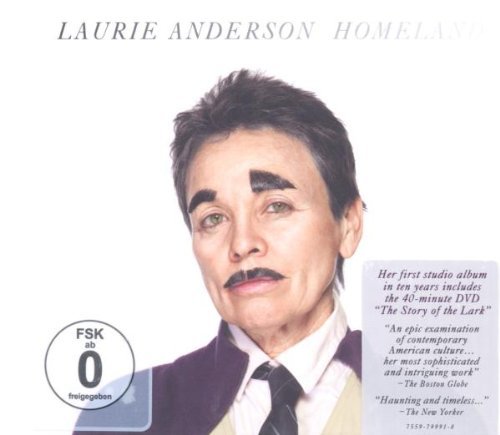 Homeland’s biggest achievement is to sculpt a lot of minutes of material – both new tracks and ones she’s been playing live for years – into something that feels textured and whole, rather than fatly fragmented.»

"america is a good place for stories," laurie anderson told the guardian right before she brought 'homeland', her self-described "concert poem", to english stages. 'homeland' contains some of anderson's most incisive work - darkly humorous, starkly emotional, and, at times, movingly tender. her stories are once again about these united states of america, the sprawling subject that first brought her acclaim more than 25 years ago with her eight-hour reagan era phantasmagoria, united states, parts i - iv. 'homeland' is a distilled, up-to-the-minute portrait of our agitated nation, its politics, its economics, its delusions and its dreams. her tone is less outraged than elegiac, mourning for lives lost, ideals misplaced. the music is dramatically stripped down to a handful of players, centred around anderson's haunting violin and voice, frequent bill frisell band-mate eyvind kang's viola and peter scherer's keyboards. the arrangements are embellished with such touches as the siren-like vocals of antony hegarty (of antony and the johnsons), thumping keyboards from keiran hebden (of four tet), and, on the brilliant, wickedly funny single 'only an expert', a gnarly guitar turn from anderson's husband and co-producer lou reed. 'homeland', long awaited in recorded form, has evolved over more than two years of touring as anderson developed the songs in front of concertgoers around the world, from downtown clubs in manhattan to an amphitheatre in athens, greece. in artforum, anderson summarized the songs as "one-third politics, one-third pure music, and one-third strange dreams." the work was shaped more by humanity than by technology; anderson built an intimate rapport with her audience during a show that featured a shifting set-list of new material and relied on words and music far more than visual and theatrical effects. that intimacy is just as palpable in the songs that evolved to make up her new album. the guardian said 'homeland' 'represents some of the most purely beautiful music she has ever made.' in the states, daily variety declared, 'the music that accompanies the vignettes and songs is some of the loveliest that anderson has ever written ...like the narratives it accompanies, the sound's grave but not without wit; measured and dispassionate, but not without heart.' on the road, 'homeland' drew acclaim and attracted controversy for its political content. but anderson is not merely criticizing or complaining; on tracks like the stunning 11-minute album centrepiece, 'another day in america', anderson is really singing for our survival, retelling the stories of our present state in the most forthright material of her career. it can be harrowing but it can be hopeful, and it is as riveting as anything anderson has produced since the groundbreaking big science in 1982. as variety concluded, 'homeland reinforces anderson's place as the best interpreter of our troubled times.' the dvd contains two films: 'laurie's violin' (7:22), in which laurie plays and talks about the violin, and 'homeland: the story of the lark' (41:27), an art documentary broken up into 16 chapters. packaging: 36-page hardbound book with cd and dvd.
description from www.roughtrade.com