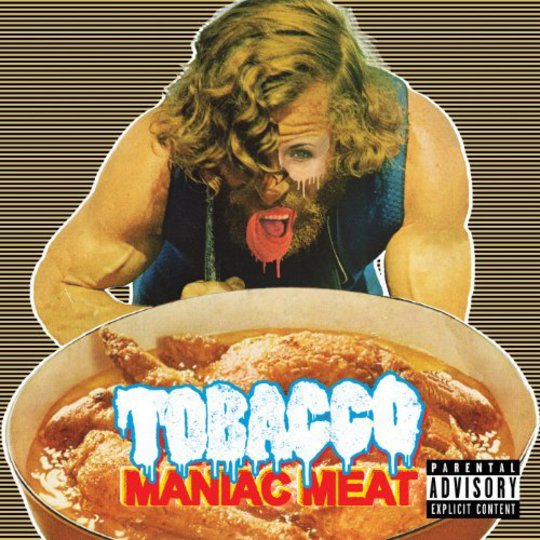 On occasion, it's hard to exactly put your finger on what makes a record sound quite so brilliant. This is a problem for your average critic: how to quite capture that intangible 'something' which elevates an LP from mere run of the mill to something quite spectacular.

It's even more of a problem when you raved and ranted about the brilliance of a previous album, only to find the follow up effort to be something which seems to lack the spark magic touch of it's predecessor. Tobacco, also known as Tom Fec, one third of pysch prog futurists Black Moth Super Rainbow, unleashed one of my personal favourite albums of the past few years in Fucked Up Friends, which finally saw a UK release last year. And now he's back to try to replicate the shifting warped vocoder synth 'pysch-hop' of his debut, with new record Maniac Meat.

This time around he's garnered a lot more interest, perhaps as a result of the runaway critical praise that greeted Fucked Up Friends, or perhaps because of the presence of some heavy friends: indie rock's favourite white boy with a sampler Beck features twice on Maniac Meat, getting his tongue around alliteration even more twisted than that of the album title on 'Fresh Hex' and then adding echo chamber vocals to the blunted synth waves of 'Grape Aerosmith'.

Yet whilst all this might suggest that Fec's looking skywards, Maniac Meat is as much a retread of the ideas liberally splattered around on Tobacco's debut as it is an attempt to boldly go where vocoder synth hasn't been before. And the problem is that, whilst Fucked Up Friends was characterised by a looseness which saw track seamlessly flow into track, Maniac Meat feels very much like that difficult second album, one foot planted firmly on the ground whilst other appendages grasp and flail for new territory.

This is not to say that Maniac Meat is a bad album. But the more I listen to it, the more it feels like a confused one. Fec has certainly attempted to go bigger, better and louder, and whilst this works on tracks like 'Sweatmother', which sleazily bumps and grinds its way further up the inside of a perspirating groove, all itchy four on the floor beat and liplicking bass, the sheer volume does tend to mar some of the subtleties at play. The rolling crunk beat of opener 'Constellation Dirtbike Hex' might ape the phenomenal opener of Fucked Up Friends, 'Street Trash', but then some hellishly loud cymbals smash their way in awkwardly, jarring and juddering against the more delicate synth. Beck's first contribution on 'Fresh Hex' also leaves a lot to be desired: his stream of tongue twisting c words over one of the album's best tracks comes off more clumsy than cerebral, leaving the listener craving some more of Aesop Rock's hallucinogenic insights.

Perhaps part of the problem is that Fec's initial cocktail of rolling funk, drifting kraut psych and crunching beats was such a perfect blend that when he messes with the ingredients, the result feels somehow imbalanced: witness the (mostly) overly busy sonic mess of 'Nuclear Waste Aerobics'. Certainly, many of Maniac Meat's best tracks don't stray too far from the original formula: the delightfully pulsating 'Mexican Icecream' and breathy 'Stretch Your Face' featuring the kind of wayward synth lines and heat-warped percussion that make Tobacco such a joy to listen to. Similarly, the spacey Vangelis synth lines of 'Unholy Demon Rhythms' drift effortlessly over spiralling washes and thumping human beatbox percussion.

But in the end it all comes down to generating that intangible spark from a broadly similar set of tools: for some reason, where Fucked Up Friends had it in abundance, Maniac Meat has it only in psychotic episodes, like the ground hugging bass of 'TV All Greasy'. And while Maniac Meat can hardly be described as forgettable, much of it simply isn't thrilling or revelatory in the way that Fucked Up Friends seemed to be.

In the end, Maniac Meat is only really disappointing when compared to what came before, because try as it might, it can neither supercede nor outdo its predeces at it's own game. On the evidence of this perfectly serviceable record dotted with a few experiments of varying success, it'll be interesting to see where Fec takes his solo project next. And if I wanted to be damning with faint praise, I'd say that Maniac Meat fails to dampen my enthusiasm for Tobacco's continuing project, even as it drifts gamely past the listener all too often.