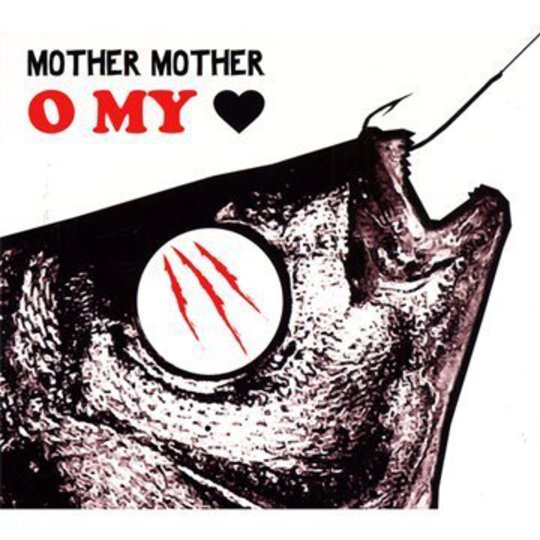 Vancouver quintet Mother Mother arrive almost feeling like the finished article. That isn't to say they are some sort of super band, covering every base and providing every satisfaction which anyone could expect from an indie pop-rock outfit. Rather, it's difficult to think of an album as melodically and compositionally assured as O My Heart being the work of relative newcomers, this their second album after 2005's self-released Mother (later re-jigged and re-issued as Touch Up). In fact O My Heart is possibly the most effortlessly bright melodic indie-rock record since The New Pornographers' Twin Cinema, a band to whom Mother Mother bare more than a passing resemblance, but more of that later. There's a fish hook on the cover (with a freaky-eyed fish attached I should add) and there are hooks aplenty inside.

Case in point, look no further than the opening title-track. It's fairly typical of the album in the way its catchy melody glosses over a darker core. Although the brooding bassline, ominous synth washes and prickly guitar find Mother Mother at just about their moodiest, the rhythm in frontman Ryan Guldemont's vocals and the buoyancy provided by the honeyed female backing keeps this light and catchy. It's not that together Mother Mother are technically astounding vocal harmonisers. Even with three vocalists singing they don't cover a great range. In fact Ryan Guldemont often tends towards a Britt Daniel-style falsetto that puts him close in range to his female bandmates, resulting in a sort of androgynous glaze gleaming with inter-band chemistry, which is perhaps where they most resemble the New Pornographers, with whom they also have in common producer Howard Redekopp.

This is evident on album highlight 'Burning Pile'. A mid-paced stomp that descends into a string heavy spiral of a chorus which could potentially be cloyingly melodramatic, it's instead rendered in rather more arch tones by both the high-pitched harmonies and some neat musical manoeuvres; a mocking brass squeal here, a frenzied tinkling of ivories there, a high violin line leading into an unexpected key change, a sudden pause followed by a group shout. It's these sort of musical details that O My Heart bristles with which make it a continually rewarding listen despite the fairly standard guitar/bass/drums/synth line-up.

While Mother Mother could almost have relied on their excellent knack for melody, there also is enough textural variation to keep things interesting. 'Wisdom' begins with shuffling acoustic fingerpicking ghosted by warm brass, succeeded by jazzy piano chords and a simplistic stomping drumbeat. 'Body' begins with squalls of discordant violin eventually hitting upon an urgent see-sawing motion for the taut verses before easing into a beautiful drift as Guldemont bemoans "I've grown tired of this body, cumbersome and heavy body" on the album's first moment of out and out beauty. This is quickly followed by the gorgeous acoustic shuffle of 'Ghosting' with a chorus which showcases the vocalists' ability to diverge harmonically, Guldemont taking the lead while the girls deliver a backing of breathy "aaahs".

The album's anthemic highlight however is the Pornographers-esque power-pop of 'Arms Tonite', wherein a deceased lover swoons over passing away in his/her lover's arms. Some may find the conclusion that "It was nice" to be a little too twee for their taste. Indeed it's tempting to suggest that irresistible melodies and brilliant harmonies actual make O My Heart a bit too much of a sugar rush (see the somewhat nauseating single 'Hay Loft'), where the precise pop execution often disguises the sentiments of songs. In fact even the more ponderously paced 'Miles' sounds rather like 'Fill My Little World' by annoying pop extraordinaires The Feeling.

To a degree the record hits you at a gut level with its melodies and dynamics, the lyrics being something of a secondary consideration. However, Guldemont does exhibit a knack for skewed world play on several tracks, most notably 'Wrecking Ball' ("I made a wreck out of my hand, I put it through the wall, I made a fist and not a hand, Call me a reckless wrecking ball"), although the darker themes are somewhat obscured by the chirpy melody.

'O My Heart' is an album people will love just for making them feel good, without giving any great deal of thought as to why, which is exactly what good pop music should be capable of doing. Should you like, there's a darker heart beating underneath.