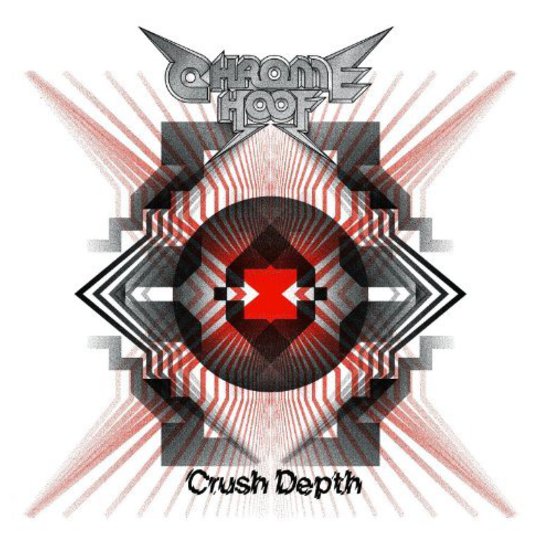 Described by drummer Milo Smee as "a record nobody likes" in an interview I conducted before the record was even released, Crush Depth had already been unfairly, if self-deprecatingly, maligned. Chrome Hoof's third full-length embodies all of the dizzying contrasts and sonic melding you'd expect from Leo Smee, the bassist of metal band Cathedral, and his brother, when working with an experimental electro-disco-funk orchestra. Rather than wondering whether a concept album incorporating grandiose instrumentals with science fiction allusions all fitted to a hefty and loose rhythm section would work, Chrome Hoof have thankfully just delivered it.

The opening rusty squeal promises a rough ride. In fact this dense exploration of technicality and textured grooves is more immediate than expected. It's easy to envision lost oddball Seventies soundtracks being piped into Chrome Hoof's heads when crafting this exhilarating album.

Thankfully, I can't accuse Crush Depth of being overly-cerebral, though it's clear a titanic effort was exerted on it. Yes there is time signature bending and interlocking layers that imitate a planet's ancient geology, but none of it is for the sake of complexity. Instead each flamboyant flourish draws attention to the tremendous melodic strokes caught in the swathe of its undulating and unremitting rhythmic drive. With the eclectic vocals of Lola Olafisoye in place, tension is ramped up by her stalking, crooning and unnerving yelp.

Its ambition lies in the scale of the operation - up to 22 people were involved in a recording made on a comparatively miniscule budget and yet the album still defies regal pomp and overblown statements. Each counter-melody and texture is interwoven so as to cushion and support the bare bones rather than expose blatant afterthought. Pre-Emptive False Rapture, from 2007, sounds incredibly sparse in comparison, though that record's stellar backbone - the brotherly tag team of drums and bass - is naturally retained. Here choirs, harps and violins enhance the stark core, leaving it brimming with menace. There's a playful uncertainty too, which is especially perceptible on the occasions songs are allowed to breathe for a moment. The anticipation can be sweat inducing.

'One Day' for example is an incredible achievement in dynamics and dramatics. Starting with a blood-curdling howl, violins and snapping guitar duel on a simple but unexpectedly shifting riff before breaking into a funky verse with clean R&B double stops. The previous riff returns with extra twists and brass while an electronic voice intones and Lola shifts her register into a gentle falsetto. Following this build up, it erupts into a bellowing, doom-laden orchestral crescendo which ascends into nail biting territory. Meanwhile electronic mites bite into the arrangement before it all glides into a simple guitar vocal and drum breakdown. This quiet breather allows strings to seep back in with violent stabs while the mood seethes and broils. It finally ends with the entire band at full throttle. Unbelievably, all of this happens in just over the time it takes the average playlisted pop song to play through once.

Crush Depth continuously assaults with theatrics but it never steps into unnecessary finery. The cinematic feel of the record keeps at arms length those who want a prettily wrapped, self-explanatory melodic parcel. Yet it's a fascinating record whose unabashed sense of fun and the absurd never undermines its other strengths either. Rivulets of melodic interplay and diamond-birthing compaction of wildly conflicting elements keeps this record unique and consistently surprising. It's nowhere near as modest as its creators but is most definitely a triumph.