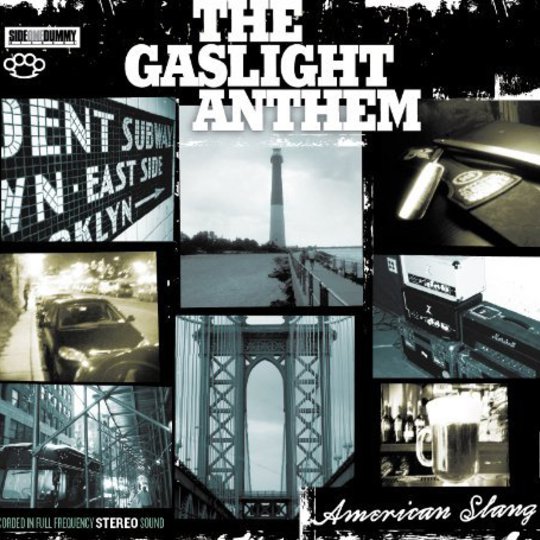 It's fair to say that The Gaslight Anthem are an Everyman type of band. Their fanbase ranges from ageing punks in the Midwest to anyone who has listened to Xfm for more than 20 minutes in the last month. Even their name conjures up images of soft rock being played over a crackling AM radio. They're punk rock made for driving with the top down, which is as bizarre a notion as it sounds. But it's a beautiful concept if you roll it around your brain a little. Take the acerbic sting from punk, and mix it with the craft of Seventies mainstream rock. It's just sharp enough to cut, just friendly enough to sell.

On American Slang, their third album proper, the sources they pull their sound from are clear enough. It's hearts on sleeves time, so the first shelf contains Tom Petty's guitar tones, the second the attitude and speed from The Clash, and the third holds the stoic earnest nature of Pearl Jam. It's a composite that works so well that it's almost eerie. 'American Slang' is a perfect single, beat-driven, with a crystal clear chiming riff. Brian Fallon's lyrics are heartfelt but satisfyingly vague. "They cut me to ribbons and taught me to drive"... if that doesn't summon up quasi-historical inner murmurings from men of a certain age, you should reach over and check their pulse. It's an opening track that few bands could exceed with a better song, and to be fair, it's best to start strong and let the others bask in the afterglow of a that might well be the 'Don't Stop Believin' of 2029.

Even if it is all downhill from there, it's still a sweet ride. 'Stay Lucky' is the fastier, punkier follow up. Raising the tempo and temperature, it's another mini-teenage nostalgia trip, recalling the time "when you were young, and everybody used to call you lucky". Regret and nostalgia for lost youth are the over-riding themes throughout, and spill through to song titles... 'Old Haunts' talks about "forgotten ghosts", the song's target keeping memories as though they were relics in a mausoleum. It's powerfully resonant material, deftly underplayed to keep the lyrics at the forefront of the listener's mind.

But well before the themes have revealed themselves, an uncanny feeling grips me and stays for the duration; the production is cookie cutter perfect, and the song structures are predictable to the point where changes can be guessed to within fractions of a second. It's like being fed delicious cookies by a terrifying, calculating machine, and what's worse is that it's an oddly comforting experience. The familiarity moderates the intensity of emotions on show with an over-arching sheen, and even if that trade-off lessens the impact a little, it's one the band have been willing to make. It does make me wonder what the demo takes must have sounded like, and I'm fairly sure other bands with a less perfectionist bent would have seen those demos as being as close to the finished product as the versions that appear here.

Even with that super high-gloss finish, it's hard to dispute the depth of songwriting talent throughout American Slang, and as a summer rock album, it's (quite literally) nigh on faultless. Expect to turn on the radio and hear them instantly for quite a while yet.