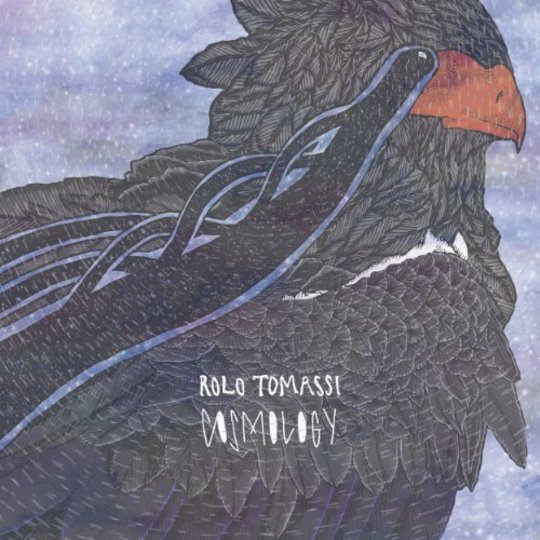 Sheffield quintet Rolo Tomassi have come a long way since their DIY beginnings in 2005. Cosmology was recorded in Los Angeles, produced by Diplo and mastered by Howie Weinberg (Nirvana, Faith No More, Smashing Pumpkins). Their first demo was recorded in a shed. No surprise, then, that this time around the band aimed for a more accomplished, complete sound.

While Cosmology is certainly less jazzy and fractured that its predecessor Hysterics, it somehow comes off sounding like it owes more to the likes of Dillinger Escape Plan than anything you might have expected Diplo to bring to the table. There are less unexpected changes and disjointed transitions and on the whole the experience is a smoother one, with a few tracks merging into each other. This ultimately leads to the band throwing its metal, hardcore punk and jazz influences into the blender to create more cohesive sections, rather than fencing their influences off from each other.

That is certainly not to say this album lacks edge or intrigue. The growling intensity of Eva Spence' vocal style is still unnerving and sometimes makes the leap to outright frightening, dominating the mix with its gravelly tone. This is no more apparent than on the opening trio of tracks, which fly by in a four-minute flurry. Intro 'Katzenklavier' gives way to 'Agamemnon', a frantic punk hybrid behemoth that playfully switches up time signatures and rhythms. 'House House Casanova' is equally brutal and clocks in at just over one minute, about long enough for you to recover from its grinding one chord beginning.

On the flip side of this are more subdued tracks such as 'Kasia', which is reined in by creepy 8-bit keyboard lines and more melodic vocals, before rising to a synth-driven climax. Meanwhile, 'Unromance' borrows heavily from the symphonic guitar arrangements of Amputechture-era Mars Volta tracks like 'Viscera Eyes', injected with the trademark Tomassi thrash, of course.

The album gathers in pace and scope as it progresses, concluding with the eight-minute title track. Opening with a wavy, psychedelic guitar line, 'Cosmology' stands out as a good example of how the band haven't given up on exploring new combinations of sounds. It is probably the closest thing to a ballad they have ever written, bolstered by an unexpected, blissful rock out that places it well in to post rock territory.

Rather than offering a new vision of twisted metal eccentricity, Cosmology solidifies and consolidates what Rolo Tomassi already had. Refinement and creative condensation are undoubtedly strong qualities for a second album from a band as young as this, and the result is a dynamic, shape-shifting LP with charm and playability, but occasionally it feels like something is lost along the way. The charm of Hysterics lies in its psychotic patchworks, its knee-jerk segues and tweaked out jazz tendencies, all of which have been toned down to differing extents this time around in the name of maturity. And while maturity, sophistication and refinement are endearing qualities, a youthful restlessness and experimental spirit are what brought Rolo Tomassi to this point and should remain high on their agenda if they are to avoid the 21st century quagmire of samey, over-produced modern metal.