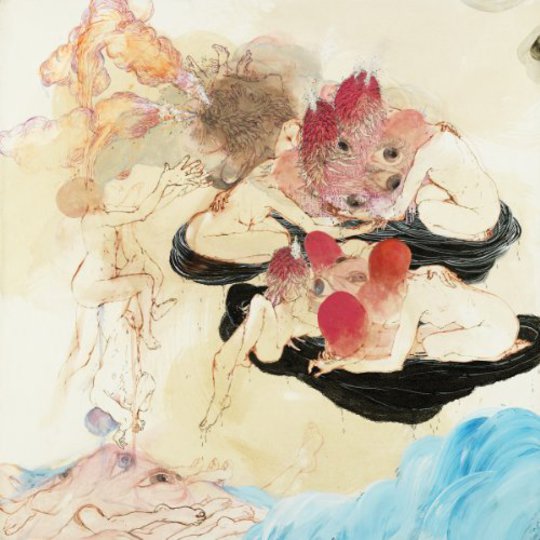 MGMT are good, but we want more. What’s an MGMT fan going to do in between listens to the new record? It may be mutton dressed as lamb, but Future Islands' debut is the answer.

Opener ‘Walking Through That Door’ captures Bowie-esque Sprechgesang, cemented in quasi-futurist lyrics such as “Science takes too long” or (on 'Tin Man') in declarations like, “I am the Tin Man”. When singer Sam Herring pauses momentarily - as if he were contemplating the gravity of his thoughts - there and then he’s more Bowie than the funny-eyed man himself. Herring (mega-Lols!) even heavily annunciates vowels like Bowie. Yet, this stream of consciousness delivery is enthralling. He certainly isn’t the first to copy an old popstar - fortunately for him, it’s part of pop’s folklore. Obviously this isn’t ideal but it’s better to plagiarise from Bowie’s vocals than Dylan’s (for instance), is it not?

In Evening Air employs a clear formula where guitar and synth play off each other, where at points they’re indistinguishable. It’s this close partnership that gives the record an architected feel. Occasionally they juxtapose the other, such as 'Swept Inside' where guitar pulses providing momentum to the ‘stretched-out to infinity’ electric organ. It’s the album’s centrepiece and it’s magnificent (despite the truncated ending).

‘Inch Of Dust’ points to the nu-goth aesthetic that occasionally shows its weird, undeveloped sound – a combination of Dave Gahan at his most versatile and drum-machines so run down and synthetic, so caked in reverb it’s like there’s dust upsetting the channels.

Final track ‘As I Fall’ is indicative of the band's arty albeit pop intentions. “I can’t touch you anymore, I can’t tell you how I feel as I fall”. By the end the synthetic strings provide suspended melancholia to sound the album out. It’s a subtle but effective move that counteracts the direct vocals.

However put aside all the inner workings on this record, it’s very much part of the zeitgeist, the reverb zeitgeist. In plain speak it doesn’t sound very impressive. Formulaic nonsense, cynical shit. Music is surely a more complex beast than just turning up the reverb as and when it’s in fashion. Let’s get a Mimi Moog and be like DEVO! Lets blast out overly simplified synth riffs and act a little psych and do the whole MGMT thing! Recently it’s all about reverb. Lots and lots of empty sound. If 2005 signified the purple patch of indiekit bands playing lack-lustre powerbalads then this year will surely mark the influx of doppelgangers performing the same tricks albeit through noisier filters. Although modern record players may not be overloaded by steel drum hits, Future Islands’ track ‘Tin Man’ should be compared to ‘Wanderlust’ by The Delays; not only because they both feature steel drums but because they occupy a time in their respective zeitgeists where the ideas they employ are on the cusp of becoming banal, only dodged by both parties applying instrumental novelty.

This is not to slur the achievements on the record, nor detract the album’s potential appeal, but this trend for watered down psychedelia and ‘reverb=noise=cool’ production values is fast becoming monotonous. For every Future Islands hit there’s a counter-example in Wild Palms or Dignan Porch. Further, when artists commit to reverb it’s a reactionary statement, it’s anti-commodity pop. Now, the influence of the bastardised proponents in U.S. Girls or her peers on Not Not Fun have had their appeal reduced to a production fad; a world occupied by high street indie kids, lens-less glasses and reduced to this digestible pulp where all the danger has been drained out leaving this stagnant reverb-pop hybrid.

Reverb reminds us of our increasing disconnection with those around us. Our decent into dystopian futures where human contact is all but a dream is a seductive if not terrifying idea. Although this idea is hinted at in the band’s name, the crafted songs are more akin to canonised pop than the avant-garde. On In Evening Air we are reminded that with exponential decay it’s not just the echoes that are tending towards zero but experimentation to boot.

Where Did The Night Fall