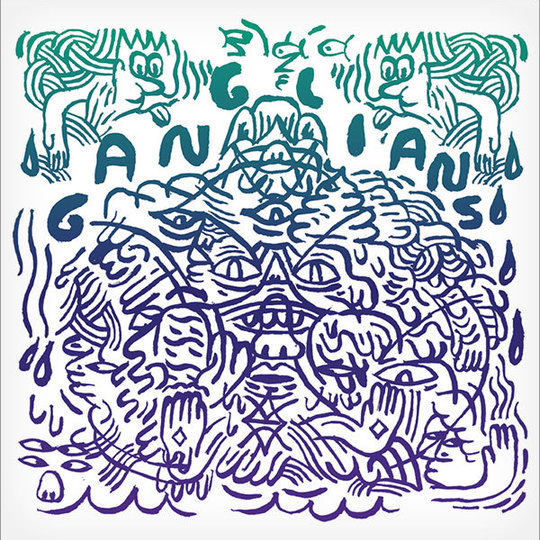 The La's' famously bonkers but gifted frontman Lee Mavers was so obsessed with the sound of the Sixties he reportedly turned down a vintage mixing desk because although it fit the bill, it didn't have 'original Sixties dust on it.'

That level of dedication to the flower power era is taking things a bit far - but like it or not, a good amount of Sixties spirit has infected some of the most musically and commercially successful bands since the decade itself ended. So don't knock it.

The lo-fi Sacramento four-piece Ganglians are themselves no strangers to the decade's music legacy and channel it directly, untapped, undiluted and by the bucketload into their first full length record, Monster Head Room. But Ganglians' real lineage is not The Beatles - they are heirs to the countless forgotten garage bands that popped up across the US in the Sixties and Seventies, only with some added unpredictable avant garde mystery. Where 2009's Ganglians EP was crazed, uptempo psyche-pop abandon, MHR - containing some of the same tracks - is a more coherent package.

'Voodoo' kicks off like a Smile-era Brian Wilson offcut with woozy choral harmonies sang by sweet, echoed disembodied voices - before the band emerges through the fog to crank up a period-perfect shuffle. It's innocent and hopeful summer and gives no clue of what's to follow.

Edgy minor chord rockers 'Valient Brave' (sic) and '100 Years' both ape Neil Young circa On the Beach, before erupting into a freak-out that would grace any psychedelic dungeon basement party. Current single 'Candy Girl' could be bohemian beard-era Beach Boys unleashed onto glockenspiels and a lot of booze. It's melodic, but also unhinged.

Prog fans will enjoy 'The Void': a spooky, atmospheric breather seguing from a folky strum to a 40-second passage of anguished screams and low bass rumbles. It is both unsettling and excellent.

'Lost Words' could comfortably be a mid-album track from the Rolling Stones' Their Satanic Majesties Request, when Mick'n'Keef briefly stepped back from the rock'n'roll coal face to indulge their inner hippies. Bright, poppy acoustic and gleaming Byrds-style lead guitar jangles obscure some drifting, reverb-drenched vocals. The very audible timing error (listen for yourself at 1:50) only somehow adds to the effect.

The record as a whole is quite a ride. Psychedelic, dream-like, faraway banter that fades in and out, cooking up storms along the way. It might be far less polished than fellow contemporary retro-heads like the more overtly mainstream Fleet Foxes or Grizzly Bear, but it's never less than thrilling. The ability of a record to surprise the listener and chart such an ambitious path of mood and texture is all too rare a thing. To quote the band's own bio on MySpace: 'None of this should work but it does'.