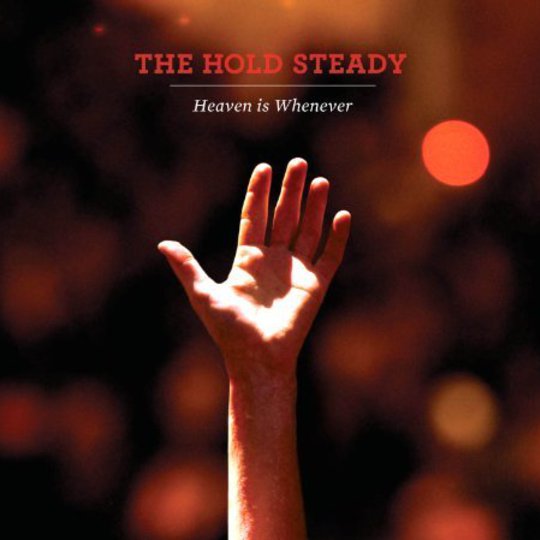 You should have seen them there, on the front lines. While the rest of the crowd surged forward to get their hands on Blur and Beatles singles, Hold Steady die-hards raced towards the desk at Rough Trade East on Record Store day. Ready to climb over their fellow man to get to the album fastest, there was an audible groan as the scant handful of copies of the new long player found their way to greedy palms and were gone. The unlucky (who outnumbered the lucky by five to one) would have to wait for another week or so to hear it. But perhaps they were the lucky ones, delayed a slight disappointment. Because while The Hold Steady haven't made a bad album this time, they haven't made a really good one either. It's a good album with some problems.

Heaven Is Whenever, the Hold Steady's fifth comes at a time of transition for the band. For the first time since their second effort, they're playing without Franz Nicolay, their keyboard general. His arrival gave 'Boys and Girls in America' a much more rounded, professional sound. They moved further away from the monolithic riffs of debut 'Almost Killed Me' and got commercially buffed and polished by sprightly keyboard lines and harmony vocals. With Franz out of the picture, where would they go next?

Perhaps unsurprisingly, they've gone backs to the riffs of old, and got Dean Baltulonis in to produce as they did for their first album. And in some respects that was the right choice, a safe pair of hands and all that. But in others, it's a choice that fails them. Having grown more technically adept, and developed a bigger classic rock sound, it seems a backward step.

That isn't to say Heaven Is Whenever is badly recorded. 'The Sweet Part Of The City' has creaking acoustic guitars, subtle layered slide parts, and nostalgic memories in the lyrics. It's a beautifully observed introduction, and then the riffage begins. Compared to their earlier material, 'Soft In The Centre' sounds a little tame in the rock stakes. The lyrics are still fantastic, in part. "I'm from a place with lots of lakes / but sometimes they get soft in the centre and the centre is a dangerous place". The rest of the song pales compared to that line, and it chugs off to it's conclusion leaving no other real indent on the memory.

'The Weekenders' is the follow up to 'Chips Ahoy', with the first line referencing "The whole weird thing with the horses". When it kicks in this time, there's the killer riff the last number lacked, the big rock "whoah-oh-eh-ohs" in the chorus. The formula still has some strength left, and it works here. 'The Smidge' has the same rip-roaring approach, and it even has more cowbell, but there's no getting away from how segmented the song feels. 'Rock Problems' is the Tour Diary song, and really brings the boredom and hassle of touring to life. Nice solo, but no air guitar. It's a lowlight.

'We Can Get Together' is pure critic bait, referencing so many bands that to name them all would potentially kill the paragraph. It's a safe bet that there won't be many other songs that could squeeze H?sker D?, Meatloaf, Pavement and Todd Rundgren in. It's the best thing on here, and careful ears will hear little pings of piano amid the sentimental musings of Finn, intoning that "Heaven is whenever we can get together, lock your bedroom door, and listen to your records" 'Hurricane J' should be the highlight, and again plays to formula. With another chugging riff, whoahs, more verse chorus verse back and forth, yearning words about boys and girls... they're playing to their strengths. But then in the last refrain Finn jams the Bruce Springsteen cliché generator button down hard. "Hurricane Jessie's gonna crash into the heart of the summer" It's a bit of a wince inducer, but the song should work well live regardless.

'A Slight Discomfort' closes proceedings. A mid tempo, reflective epic, stabs of piano at the end highlight Nicolay's absence once again. There's no telling how much better the song would have finished with a grand piano flourish, or how the album would have benefited from a gifted keyboard player on board throughout. In terms of their career, Heaven Is Whenever shouldn't even be a blip. Fans will buy it regardless of reviews, their detractors will be able to say they were right all along. In terms of their music though, the album could be a watershed. They're in a no man's land of their own making, and they can either stay stuck in the middle, or move forward. Heaven help them, either way.