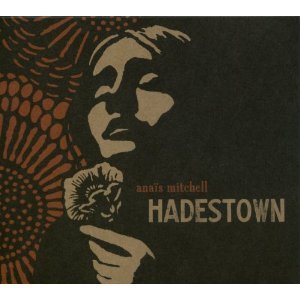 Hadestown is nothing short of awe-inspiring, aligning Anaïs Mitchell with the likes of Sufjan Stevens and Joanna Newsom via its sheer, brain-welting ambition.»

stunning new album from anais mitchell features contributions from ani di franco, justin vernon (bon iver), the haden triplets, greg brown, and ben knox miller of the low anthem. based upon the ancient greek myth of the poet orpheus and his doomed quest to rescue his wife eurydice from the underworld, anas mitchell's new album 'hadestown' evokes our depression-era past, the current financial disaster (though it was written before the stock market collapse), and a post-apocalyptic future. anais, who sings the part of eurydice, the character whose (metaphoric) death propels orpheus into 'hadestown' is joined by a veritable who's who of modern indie folk / rock on the release. justin vernon of bon iver plays orpheus; greg brown is hades, lord of the underworld ('king of the kingdom of dirt'); ani difranco plays hades' strong-willed, subversive wife, persephone; the haden triplets (petra, rachel, and tanya) are the greek chorus-like fates and ben knox miller of the low anthem is the messenger hermes. together, they create a world where people hide behind walls in a misguided attempt to preserve their 'freedom' and protect their riches.