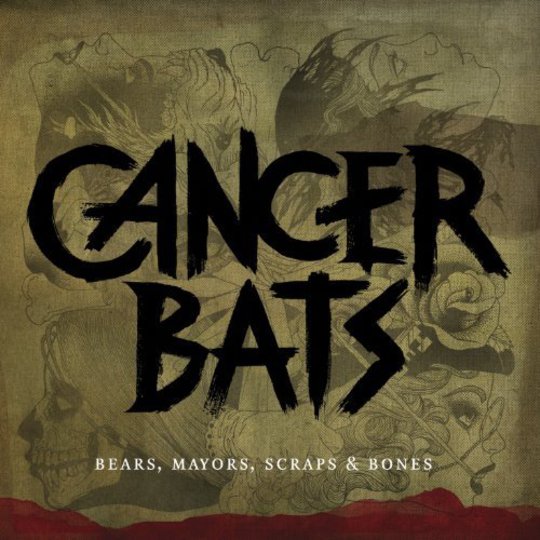 From the meandering title of this record it’s apparent just how unfocussed and divergent it aims are. On opener 'One of These Days's Liam Cormier howls “One of these days I’ll sleep this away”, a line indicative of the ‘mortal coil’ philosophy extending throughout the lyrics. The suggestion that the band are somehow vindicated by suffering acts as a central cliché. Unfortunately Cancer Bats fail to illustrate how they’ve found themselves in such a predicament. Is it just insomnia plain and simple? Is it something more? More I wanna be hated than sedated, the band strive for universal appeal with unqualified rage and banal sonic ventures.

Ironically, salvation, if any, comes with the track ‘Doomed To Fail’ and a spiralling guitar entering increasingly insane riffs, which in isolation could be deemed far too vibrant for a band who almost blindly pursue the hardcore mentality.

Despite adopting a don’t-give-a-fuck persona, the band are dry when self-deprecating. Rarely do they vent their spleen at others. Change comes on ‘Black Metal Bicycle’ whereby a relationship is ended for the pleasure of the audience. Surprisingly, ‘it’s not you it’s me’ is the response. But what’s this? “If you kill for me I’ll die for you… I’m scared to death of dying alone.” Well you should stop pushing them away shouldn’t you?

It’s not that the lack of continuity directly detracts from the final product. However, there’s a clear distinction between brutalism and crude. This is angry music for angry people.

“I’m sick of the tired and weak.” But aren't the lyrics by someone tired and weak? Tired of expression, tired of communication... before the track is out such an explicit criticism becomes inverted back upon the singer.

The problem is that Bears, Mayors, Scraps, And Bones does not create the platform for catharsis. It is so self-referential and exclusive to the band that a listener cannot appreciate nor relate to the strife. Through only referring to the individual, and without any explanation, the lyrics assume that the listener is just as oppressed and perturbed by life.

Sonically the record is super masculine. It drips of man sweat. Music for marines; the moment in Fahrenheit 9/11 when the soldiers reveal the soundtrack for combat. A world underwritten by fear, testosterone and the capacity to kill. The production extols conservatism, everything is clean, meticulously done. For the tracks reliant upon a constant aesthetic the heavy as hell riffs become but incidental. Only on the more flamboyant excursions, ‘Doomed To Fail’ being a key example, does the recording capture the feral nature of the music. As with the music, there’s little commonality. Leaving that which distinguishes them from their peers being their myopic search for ‘tour de force’ sounds at the detriment of a unique and stylised aesthetic.

Fortunately ‘Radiation’ shares a moment of clairvoyance, “I’m not as negative as all this sounds / I just feel like humanity has let me down”. I concur.