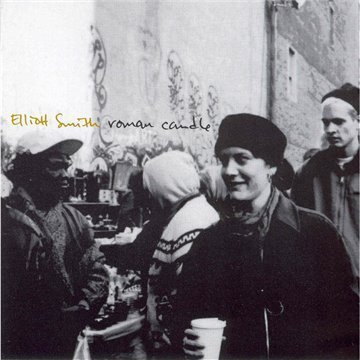 It’s more of a spring clean than a rearranging of furniture. The evocative squeaks that precede chord changes are still there, Elliott’s voice is still frayed, and the songs still threaten to rip apart. »

domino reissue a re-mastered version of elliott smith's 'roman candle'. 'roman candle' was elliott smith's first solo album and was originally released in 1994. 'roman candle' has been re-mastered for the re-release by larry crane, editor of tape op magazine and archivist for elliott's family, and roger seibel at sae mastering. 'roman candle' was elliott smith's debut album as a solo artist, even though he was still a singer and guitarist for the band heatmiser. the album has a raw, homemade sound, with smith playing each instrument and recording it on his four-track recorder. the album was never intended for release, as smith only expected to get a deal for a seven-inch record, however, after manager jj gonson played the album for cavity search records, they immediately requested permission to release it in its entirety. smith at first hesitated, and then allowed permission.
description from www.roughtrade.com</I.