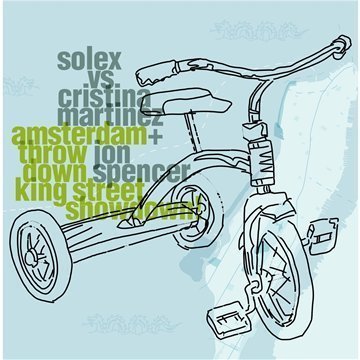 first collaboration between dj-musician-composer, elisabeth esselink and the husband and wife team of jon spencer (of avant-punksters pussy galore, boss hog, heavy trash and head honcho of blues explosion) and cristina martinez, boss hog frontwoman. they met after esselink dj'ed at a gig supporting the blues explosion. the trio immediately recorded at esselink's studio beneath her indie record shop in amsterdam, and also in new york and mailed tracks between the two as they added and edited on the way. the resultant album mixes and matches the best of both their approaches, tough, eclectic, explosive, retro and yet also at the cutting edge of 21st century dance music. all three points in this creative triangle had the blessing of indie tastemaker supreme, john peel. pussy galore were one of his very favourite bands, while solex recorded several sessions for his influential show. after several years on matador, solex now joins the buzzing bronzerat roster, where jon spencer is already comfortably at home with heavy trash.
description from www.roughtrade.com