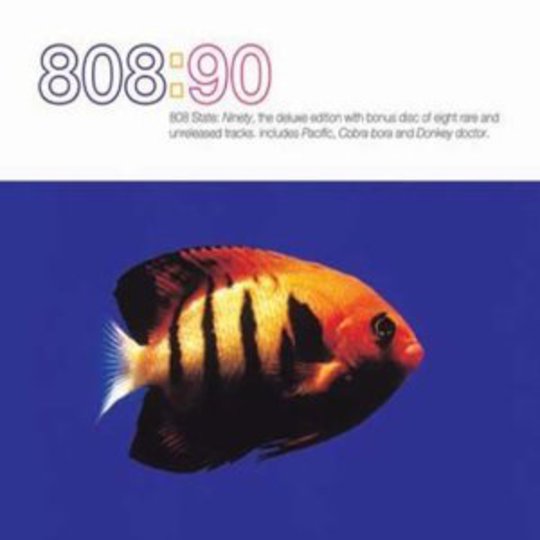 If I’d been reviewing these four double-CD album reissues from Mancunian electronic evergreens 808 State at the time they were meant to come out, around 18 months ago (indie distributors Pinnacle went bust in late 2008, leaving no-one to put ZTT product in shops), I might have found myself spaffing on about the twentieth anniversary of the Second Summer Of Love. But here we are reviewing 808:90 (1989), ex:el (1991), Gorgeous (1993) and Don Solaris (1996), two decades after Candy Flip and Guru Josh. Probably just going to dive into the albums, then.

Graham Massey and Martin Price – plus, for a while, Gerald Simpson, who left early on to produce as A Guy Called Gerald – had already recorded a couple of long players by the time 808:90 dropped, right at the close of ’89 (portentous, them?). Not many figures in British dance had even issued one at this point. It’s fair to say that 808 State made acid house, and subsequent mutations of the form, a legit album genre, 808:90 being the breakthrough release that cemented this. If most dance doyens had to destroy the band’s whole output save for one track, they’d surely spare ‘Pacific’, a number ten single in the UK. It’s 808 State’s only TUNE that has become truly canonical in dance culture – but it warrants it. There is some avian jabbering, so-wrong-it’s-right jazz sax and a bassline that’s like Chicago house guzzling creatine.

For an outfit not widely recognised as pushing boundaries in terms of fierceness, they give it some tangible welly at times: ‘808080808’’s bassline was about as hard as it got outside Phuture. ‘Cobra Bora’ scrubs circuits in an unquestionably acidic way, with Balearic melodiousness sustaining the bliss; coupled with the deformed funk bassline, you could peg this as a formative influence on Squarepusher. The bonus CD, and this counts for each of the other three, is mostly inessential listening, although its mix of ‘Donkey Doctor’ is superior. If you’re itching to spring for one 808 State album from this quartet, get 808:90. (8/10)

Which is not to dismiss the rest of our lesson plan today, especially not the more sprawling (an hour, against 808:90’s forty minutes) but often highly worthy ex:el. A beefed-up budget is reflected in both the production across these 13 tracks – fleshier, with two extra members in Andrew Barker and Darren Partington, and made with the newest synths on the block – and the appearance of special guests who were Big (indie) Deals. Bernard Sumner’s vocal on ‘Spanish Heart’ makes clear the debt that 808 State paid to New Order, while ‘Qmart’ and ‘Ooops’ are basically where Björk’s relationship with dance music begins.

There’s little or nothing on ex:el that you could really call rubbish, but it’s still worth having a few misgivings about it. ‘In Yer Face’, their highest-ever charter at no.9, is a ‘large’ and bassy sack-swinger that is palpably post-‘LFO’ (the track) and pre-Chemical Brothers; 808 were at their best when their acid attacks were couched in subtlety, which isn’t the case here. ‘Cübik’, another top tenner, is undeniably dope, and chucks a sight more weirdness in, but it does sound a little like a hasty answer to nascent UK rave sensations like Altern 8, Tricky Disco, 4 Hero et al. Nonetheless, on less ostensibly flashy cuts, like ‘Techno Bell’, they do sterling work with little more than a breakbeat and an acid squelch. (7/10)

Graham Price was an ex-member by the time Gorgeous began gestating in 1992, leaving Massey as the sole remaining founder. The desire to produce an artefact of British dance which set the trio apart from prevailing trends is evident over its 15 tracks. The guest spots bus in people who had zip to do with dance music – Ian McCulloch, who does an alright job on ‘Moses’, and UB40, who appear on a cover of their own ‘One In Ten’. It’s not a disaster of tenuousness or anything, but it does betray a band who were by now at home doing arena support slots to rock and indie crowds as much as throwing down for saucer-eyes in dicey warehouses.

Joy Division are sampled for ‘Contrique’, flitting through its rushing prog-house pomp; a trick 808 State like so much they do the same thing for ’10 x 10’ with The Jam’s ‘Start!’, and ‘One In Ten’ with Kraftwerk’s ‘The Model’. Fair enough, but it comes off like bald homages to icons rather than anything inherent to the songs’ structures. They claw back your dancin’ feet’s respect with deep, semi-jazzy house throwdowns like ‘Southern Cross’ and ‘Nimbus’, and their lithe leaps into proto-rave territory. (6/10)

Don Solaris, from its self-styled ‘Intro’ track, makes no bones about informing you that this is an attempt to push the boat out further: while their first LP was named Newbuild, since them they’ve dedicated themselves to rebuild. The shifts UK dance culture experienced from ’93-’96 were sizeable, and arguably not all positive. Jungle became jazzy and conceptual, rave and techno’s cachet sank like a stone and trip-hop prevailed – including on this album, at times.

It’s not until hearing him wax poetic on some expansive, glimmer-synth techno that I’ve realised how much M Doughty, once of Soul Coughing, can sound like Underworld’s Karl Hyde; maybe 808 State had this in mind, though. His intonations work well with ‘Bond’, certainly a better and less dated turn than James Dean Bradfield-featuring ‘Lopez’ or Louise Rhodes of Lamb on ‘Azura’, an uneasy attempt at drum’n’bass. Unlike previous efforts, however, the trio don’t hit as many bullseyes on the non-‘celeb’ tracks. ‘Balboa’, slithery Indian strings an’all, still comes off like a Lionrock offcut, having penned ‘Pacific’ they at least earned the right to slyly rewrite it as ‘Black Dartangnon’. There’s a Brian Eno remix of ‘Lopez’ on CD2. though, which is pretty lush as well as quite the coup. (4/10)

They’re a definitive ‘less is more’ band, 808 State. When they just had some clonky synths and a fresh’n’frightening new batch of records to fuel them, they made flat-out magic a few times. Then they tried to shed their skins, understandably, and got more fiscally solvent, and results varied. You should really know about them, though.