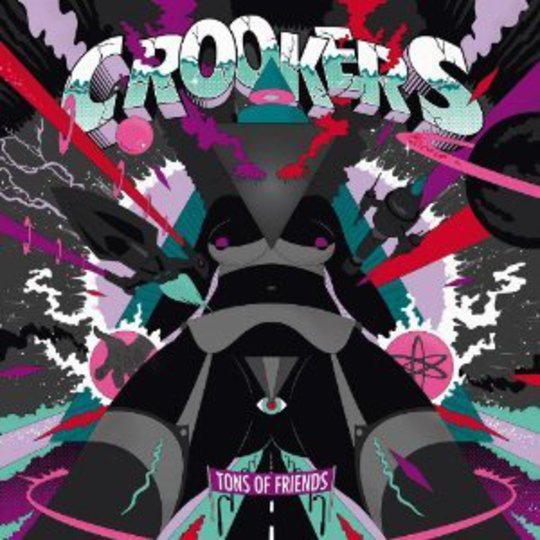 Crookers arrived on the scene with such blog-aggregated power it felt like they were being propelled by dark, unseen forces. There was plenty of genuine excitement surrounding the Italian duo; it’s just their sudden ubiquity smacked of some orchestrated attempt to usher in a new phase of electro-house. Likewise, Miike Snow have been unavoidable for months, crudely branded all over the Hype Machine backdrop and embarrassingly hyped on Spotify: “Like the Beach Boys jamming with Animal Collective in Ibiza”. Delivered direct to their new-media audience, it pays, no doubt, to get the product out quick, lest the users get bored before any profit has been exhausted. The funny thing is, aside from their ‘Day N Night’ hit remix, Crookers have barely built on their hype at all, Tons of Friends their belated, misfiring attempt.

The Knobbers EP, had some of the dumbest, funnest club tunes heard in recent time. A jolly mangle of Italo house, Bmore club, crunk and bassline, Crookers were instantly associated with Switch, The Count & Sinden and Fake Blood under the dubious banners of fidget-house. Signature remixes of Dom Rimini’s ‘Let Me Back Up’, had aggro raps pasted over an automated bass scale of primitive brilliance. Moving things on from the farty breakbeats and Ed Rec synth pads, they brought back the trashy and bolshy. Yet it’s no big surprise that trends have since moved on.

An LP of worthy-name collaborations, Tons of Friends tries to cover too many bases, failing almost everywhere. Kelis-sung ‘No Security’ should have been a corker considering her 'Milkshake' pedigree, but this limp jab at chart dubstep falls short in both credibility and sales. More evidence that Crookers should stick to what they’re good at is found in Carrie’s plain weak ‘No Mercy’. Elsewhere Miami bass-man Pitbull’s snarl lacks menace, while Kardinal Offishial’s turn on ‘Put Your Hands on Me’ is all thug, no charisma.

One or two decent guests part rescue this from absolute dreadfulness. Rye Rye is in small company being able to carry off a trademark Crookers beat, reviving her dirty Baltimore flow on ‘Hip Hop Changed’. Major Lazer, Leftfield and Supahype’s guestspot on the demented dancehall march of ‘Jump Up’ is a reminder of the abyss in quality between …Friends and Guns Don’t Kill People, Lazer’s Do.

At 20 songs Crookers debut LP is overwhelmed by shameless club pap straight out of a bad Kiss mix. In fairness, they’ve never seemed qualified for being more than a party act. Frazzling heads with some quick-spun, bass tunes is one thing, but they patently struggle to sustain attention in this unmixed, hour-long release. Crookers have given a fairly clear sign of their intentions. As Kanye said: “Fifty said go ahead switch the style up/If they hate then let ‘em hate, watch the money pile up”. Rubbing shoulders with Will.I.Am may boost their profile, but Crookers will squander their status with this mostly fruitless offering.