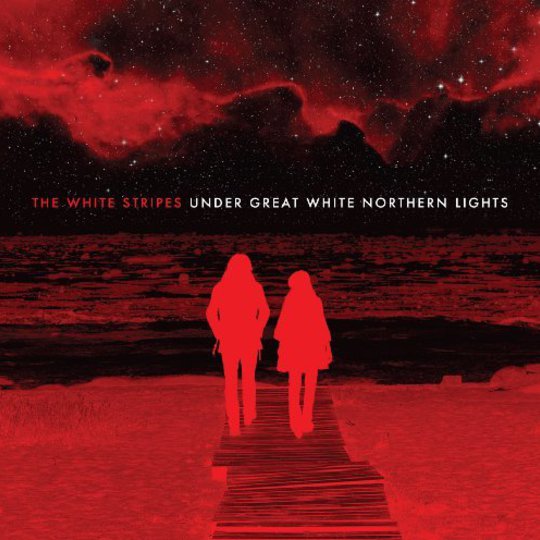 The last time we saw The White Stripes in active duty was 2007, the year they gifted us their sixth, to date final studio album, the barking Icky Thump. The record was set to have two accompanying tours; in typically perverse fashion, the regular one was cancelled after seasoned gig veteran Meg came down with ‘acute anxiety problems’, and the band has been virtually dormant since.

Before that, though, came a dementedly whimsical jaunt around of all ten of Canada’s provinces. Three years and two shonky new Jack White projects later, Under Great White Northern Lights combines a documentary about that tour, and a CD of live recordings culled from it. Though the latter part is far from faultless, the first track does as concise a job as any in answering the question ‘so, what are those White Stripes like?’ (the alternative, I suppose, being something along the lines of ”er... blues... siblings... but... um... not”). Bagpipes strike up, ringing out loud, proud and perplexing, until a minute in they’re not so much replaced as atomised by a nuclear roar of blues-metal guitar, Jack attacking ‘Let’s Shake Hands’ with a fervor verging on psychosis. This is The White Stripes: arch, primal, slightly maddening but with an unvarnished fury that completely belies their success.

So that’s good, and in general it’s hard to think that fans will be actively disappointed by a CD that includes vigorous versions of all the faves. As a whole, though, it’s not really essential: Jack’s guitar is so monstrously loud it mushes the nuance out of half the songs, with the set at times simply resembling one 16 track guitar solo. There’s more to it than that, of course, but at the end of the day nobody’s been hanging around for three years for this, and one suspects if the duo were out to make a ‘definitive’ live album they’d pull out rather more stops.

No, it’s a nice adjunct to the main event, the documentary itself. A sizeable-ish portion is taken up by concert footage, some correspondent to the CD; it’s a pretty obvious thing to say of the Stripes, but they are an exceptionally visual band, and director Emmett Malloy gets close, capturing the two very different energies but very compelling energies of their live show: Jack commanding and physical, Meg possessed of an almost trance-like calmness.

But it’s the strange, dreamlike tone of the rest of the film that entrances the most. Why are they doing this tour? Early on Jack offers a fairly matter of fact explanation, that they’d previously had visa problems in Canada and had decided to do it ‘properly’; but how much sense does that really make? Canada is the second biggest country on the planet, and while the Stripes play some of its obscurest recesses, it’s hard to see that they’ve really ‘done’ Canada. Or if they have, it’s not like you get much of a sense of it: the Stripes meet all manner of townsfolk, from suspicious truck drivers to tribal elders, yet the duo always blend in so seamlessly that it’s hard to believe this wasn’t all staged, be it a po-faced Jack’s assertion to a an equally humorless town mayor that “we’ve been everywhere: Estonia, Panama... uh... Argentina... um, Cleveland”, to the duo kilting up and suddenly appearing in a military parade in Halifax as if it were completely normal. It doesn’t feel like a travelogue so much as a series of snapshots that the Stripes have almost been superimposed onto. The duo act as if what they’re doing is perfectly normal; the townsfolk do the same, from the one note show, to a gig singing ‘The Wheels on the Bus’ on the titular public transport.

Meanwhile Malloy is constantly catching hyperreal scenes: the duo standing by a pair of candy coloured propeller planes, the type of thing they might travel in if Wes Anderson were their tour manager, but SURELY not in real life; Jack playing piano in time to a Chuck Berry song on a distant radio, Meg smoking distractedly, the camera poking through a pot plant; one of the band’s bowler-hatted entourage chatting to the two while they’re apparently asleep; the use of subtitles on every single utterance of the (admittedly very quiet) Meg. Nothing’s definitively staged, just a lot it's rather unlikely. Meanwhile, Jack’s interviews all feed nicely into the mythology of the band: he never humanises himself by commenting on the tour; rather he holds cryptic court on the band's very nature. Almost the first thing he brings up is the subject of whether or not the duo’s entire career is just one big act of artifice: but he never gives an answer either way.

It looks likely that a new record will happen, which is good, because Under Great White Northern Lights would be a funny postscript. It's not particularly revelatory, less cohesive a concert film that Under Blackpool Lights, and in no way intimates that the band was about to go into hiatus. Really, it serves, more than anything else, as a reminder of just how singularly odd the White Stripes are, and how boring things are without them around.