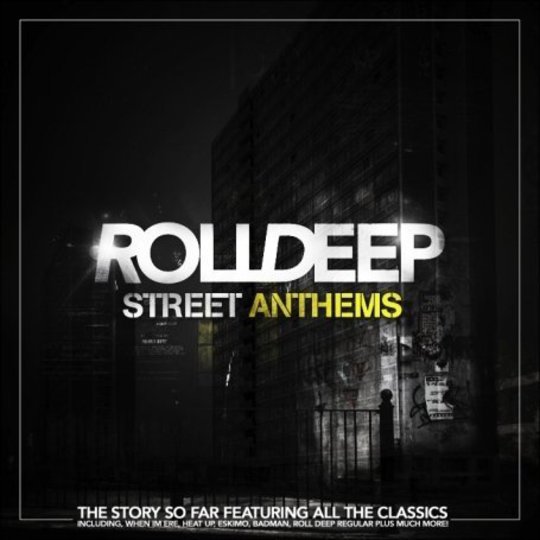 Albums never meant much to grime. It's barely even a song-centric genre, with its usual emphasis on bars or catchphrases of just a few words, so it's generally best to look at any long-playing grime release as collections of disparate work rather than cohesive statements. This focus on the concise makes grime impenetrable if you’re approaching it with a mindset that values albums over all. But Street Anthems, a well-chosen best of from trailblazing collective Roll Deep is as good an entry point as the seminal 2005 compilation Run The Road

Street Anthems presents grime in microcosm. It’s got the frantic energy of its raves, with star MCs falling over each other to spit bars on bangers like ‘Roll Deep Regular’. It demonstrates the genre’s unique mix of rowdy inventive production with thrillingly raw sounds; the fluttering intro to the Danny Weed-produced ‘When I’m Ere’ an instant ‘hairs up on the back of your neck’ moment. It highlights the insanely introspective, micro-level lyrical approach, with endless self-obsessed references to “doin' this ting” and lots of bars about the fact that these MCs write bars.

There’s the uglier lyrical side too, with some undeniably nasty sentiments being expressed over the course of 19 songs. Or 'U Were Always' Dizzee Rascal spits out the gross: "you're a slag and you're swag" while 'Celebrate' boasts of the crew’s access to "non-stop gash". For me, the edge is taken off the causal chauvinism by the endearing silliness that’s also running through the lyrics. How can you stay angry with Skepta when he seamlessly introduces himself, also on ‘Celebrate’, with: "My name's Skepta, I'm in Roll Deep but I live in North London so sometimes I don't see them / more time I see [Roll Deep members] Wiley and Max, Trim, Danny and Scratch, Flow Dan and Karnage on the weekend”?

The other grime hallmark covered on Street Anthems is the genre’s uneasy relationship with pop. Formed by Wiley in his Pay As U Go days, Roll Deep housed future Genuine Popstars Dizzee Rascal and Tinchy Stryder who took grime overground (albeit with any semblance of grimey sounds removed by the time their popularity peaked). That their success has seen them embrace wildly different styles to the scene they came from should come as no surprise.

Grime MCs have always been commercially savvy and Street Anthems features routine self-censoring re-fixes of its most explicitly violent bars, presumably because they’d ruin any chances of radio play left unedited. A bigger obstacle to wider appreciation is that grime’s most overt pop dalliances have always come off as incredibly self-conscious. Deal-sealing hooks are incongruous, like the female R&B refrain on 'Remember The Days' which sounds plucked from an unrelated song. Other times the ‘commercial’ moments are patently the weakest parts of the song, cf. 'Shake A Leg''s shrug of a chorus.

Veteran Roll Deep member Flow Dan’s recent mixtape Original Dan similarly suffers from multiple attacks of the sub-par chorus. Grime tends to work best when riddims unobtrusively power MCs through a succession of big bars. It falls apart when songs make room for refrains as redundant as ‘Just Me’’s "I don't give a fuck / I'm just me / you'll never see in the club / unless there's P".

Original Dan largely eschews grime's tinny upper ranges and goes after a weightier bass-led sound, occasionally flirting with dubstep and dancehall. Flow Dan’s strength is a towering, steady flow that’s generally heard in heavy patois and exudes authority. When he boasts ominously of his "badman persona" it's a lot more believable than some of the claims made by his compatriots. He raps at the most exaggerated summit of his accent on 'Dumpers' trading bars thrillingly with Frisco, but he’s not helped by a non-entity of a beat which lacks any of the mini melodic hooks you’d find in old-school lo-fi grime.

FD sounds better on the three-year-old ‘Stageshow’ riddim, continuing its run of making previously controlled MCs sound absolutely unhinged. His staple "stamping on the stampers, anyone / where you going son? Come back I'm not done" lines are spat out with a ferocity they lack in other guises. Sadly this power is rarely evident on the rest of the album, with the aimless ‘Bad Man Talking Remix' killing momentum and promising ominous horns on 'Show Dem' undone by a nasty auto-tuned hook.