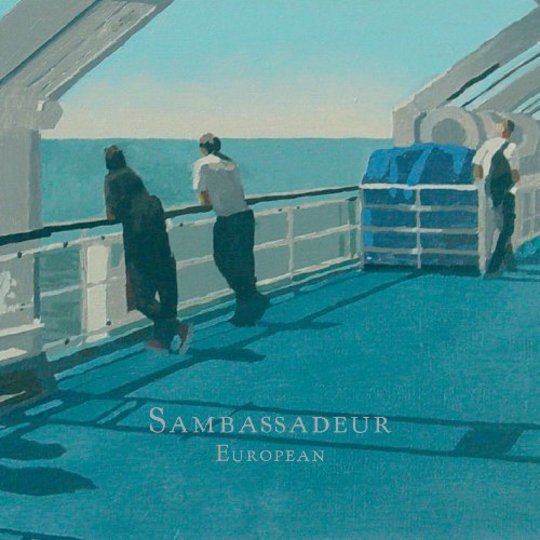 Everything about Sambassadeur's latest album is rich, from Anna Persson’s syrupy vocal tone, to the lush orchestration that garnishes each track. Having taken their name from the carnivalesque Serge Gainsbourg song ‘Les Sambassadeurs’ you expect there to be an abundance of vibrancy and passion on European, the band’s third release; though tempered by doubt and restraint, emotion lies beneath the layers of onion peel in the grey gutter of sadness.

Heartbreaking piano introduces ‘Stranded’. It feels like we are entering the soundtrack to an Eighties romantic comedy where some damsel is riding a horse along the shore, before passing her bare chested love interest as he emerges from the sea. Their eyes meet and sparks fly. To get to the point, the song is sappy indie pop that mirrors Peter Andre’s puffy face as he cries tears after a difficult television interview. A bit Belle and Sebastian, there is a sense of detached emotion that is difficult to tap into as the lone clarinet parps the call of resignation.

‘Days’ recalls the heady days of Sixties petticoat poppets such as Sandie Shaw and Cilla Black, Persson reminiscing about loneliness “When you take your boat out to sea / you must read the signs carefully / when you’re solitaire / far away / feel it coming in / at the break of day”. The track has a wonderful drifting quality as the strings flutter like a field of drooping wind socks that suddenly gain vitality after a robust gust.

‘I Can Try’ wanes in comparison to the opening salvo, derivative of the less imaginative, MOR moments of Eighties pop. It precedes a trio of hit and miss ballads as Persson pines mournfully. ‘Forward Is All’ totters on a steady acoustic strum; it’s an ode to not looking back, and as the orchestra kicks in, it really does force even the manly of men to start squinting, and claim there is something in his eye as a tiny salty droplet descends from his usually dry ducts.

‘Albatross’ contains the brilliant line “I was happy to be alone / cut my hair just like a boy”, it seems to be a contemporary response to Abba’s ‘The Winner Takes it All’ and a nod to the early days of the band when they attempted to channel Sweden’s greatest pop export. Again all the emotion comes out in the strings - the longing gaze out of the window, the sight of couples arm and arm that turn a singleton inwards, smothering themselves in thoughts of better days.

Towards the end of the album, after a brief instrumental we are confronted with ‘Sandy Dunes’, a defiant track that sees British Sea Power meeting Phil Spector in the confines of a chilly corridor. Though lyrically imperfect, and lacking that big enthralling rapturous chorus, the track summarizes the Achilles heel of a Sambassadeur song, in that there is always something missing, that extra ounce of melody that turns a decent song into a memorable life affirming one.

A cover of Tobin Sprout’s ‘Small Parade’ reveals nothing more than that the band appear to be Guided by Voices fans. It’s sad in a way that Sprout’s words in this one song can sum up everything that Persson is attempting to say on the entirety of European.