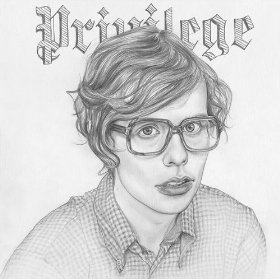 On Death & Endearments is the first in a five part series that will, eventually, make up Parenthetical Girls' fourth full-leng»

Ever the pragmatists, Parenthetical Girls are set to release Privilege--the band's new full length--as a box set of five extremely limited 12" EPs on their own Slender Means Society label. These EPs will be sold separately in sequence every quarter over the next 15 months, each as they are completed. They will not be distributed to stores. As the cycle concludes in May of 2011, the fifth and final 12" will come packaged in a beautiful, aesthetically cohesive LP box designed to house all four of the preceding releases, forming the complete Privilege album. Limited to 500 physical copies per EP, the 12"s will each feature original art by renowned Swedish illustrator Jenny Mörtsell, and will be hand-numbered in the blood of their respective band members. The first 12"--subtitled On Death & Endearments--will be released on February 23, 2010.
When last we left Parenthetical Girls, the group had undergone a seismic shift in both scope and purpose, shedding the trappings of their past--and of indie rock altogether--with their critically acclaimed Orchestral Pop opus Entanglements. An experiment in Pop maximalism, Entanglements took perverse pleasure in blending the bloated chamber arrangements of a century's worth of pop history with the rhythmic dissonance of modern classical composition--and then topping it all off with a dense, Joycean novella narrated in part by a pedophile. Needless to say, it was all a lot to swallow.
Having taken pop extravagance to its logical conclusion, Parenthetical Girls have given the orchestra their leave--and the resulting transformation is no less momentous. Returning to its core membership of vocalist/songwriter Zac Pennington, multi-instrumentalist Rachael Jensen, and producer/arranger Jherek Bischoff, the group set about a path that they have heretofore never really charted: that of sonic restraint. And though the results could scarcely be called subtle, the language of Privilege is direct and unambiguous--a new creative candor that's felt in both its words and music. It's Parenthetical Girls in fighting trim, and the difference is both immediate and undeniable.
The group inaugurates this ambitious experiment with Privilege, pt 1: On Death & Endearments--a compelling four-song suite drenched in the long-latent glam-racket so often suggested in Pennington's androgynous lilt. Nowhere is this more apparent than with lead-off track "Evelyn McHale," a Bolan-ian homage that--much like Entanglements' "A Song For Ellie Greenwich"--imagines the infamous title character as a springboard for more allegorical confessions. The cinematic desperation of "Someone Else's Muse" follows--its pulsing grandeur underscoring a tale of emasculation and resentment in the face of another's deserved success. The deathbed march of "On Death & Endearments"--punctuated by gloriously gated snares and a haunting angel chorus--simultaneously recalls the staggering Hounds Of Love heights of Kate Bush, and the calculating, icy croon of early Roxy Music. The EP concludes with "Found Drama I," a tragic, Eno-indebted lullaby whose atmospheric longing swells with heartbreaking sweetness. Together, they comprise a bold, strikingly cohesive pop clarion call that further solidifies Parenthetical Girls' place amongst the most surprising and uncompromising pop groups at work today. And there's more where that came from.
description from pr