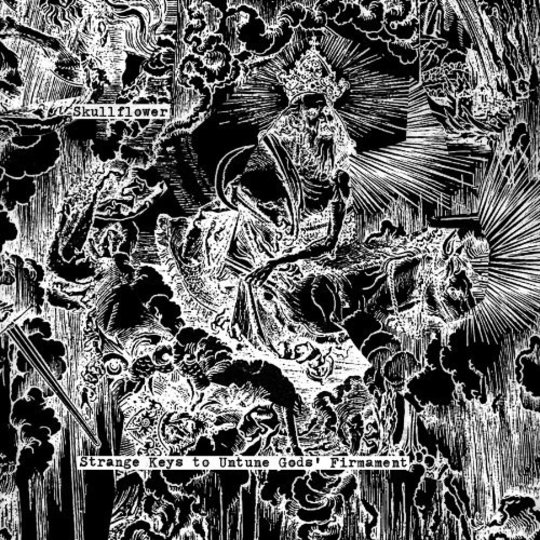 When a record opens with something that sounds not unlike a pair of jet engines warming up, afterburners throttling up and down, it’s hard not to pay attention to it. Consider that an opening salvo: explicitly directed at those who will decry Skullflower (aka Matthew Bower and friends) as wallpaper music for black metal fans. As any who have had the fortune to see Bower and co. perform in the flesh will testify, they are living proof that noise remains an artform. It’s not enough to rely on volume alone: instead, it’s necessary to completely saturate the air with howl and hum.

And that might as well represent that motto for Strange Keys To Untune Gods' Firmament. Issued on the celebrated Neurot label, this latest recording is a double CD of sonic junk, howl and cathartic fret mangling, in the vein of much of what Bower has been creating recently. Those familiar with last year’s vicious Malediction will be readily aware of what to expect: put simply, Bower seems hellbent on making Sunn O))) look like a bunch of anodyne pussies. This, after all, is an act rumoured to burn incense part-comprised of human blood at last year’s performance in a London church.

So it’s little surprise that Strange Keys… is a bleak and demanding listen: Bower isn’t going to give us an ‘Alice’ to lighten the heavy murk he’s wrenching from his amplification. Yet it is a rewarding one: the death hum that lingers over the work of a band now reaching into it’s fourth decade has a strangely hypnotic quality, although this remains a mile away from the desertified drone of Orange Canyon Mind. Skullflower are an intensely psychedelic outfit, in the most literal sense of the word, their squealing brand of feedback masochism having the ability to shift and swirl effortlessly around the listener’s ear canals. Put on a good enough pair of headphones, crank the volume up, and a sensation not unlike light-headedness descends when listening to the scrawling guitar of the forebodingly titled ‘Blackened Angel Wings Scythe the Billowing Void’

It’s not entirely odd, therefore, that the sonar like pulses of noise that burst through the murk on tracks such as ‘Gateway of Blasphemous Night’ start to take on a mournful tranquillity on the third or fourth listen. But, as the adage goes, ‘first it giveth, then it taketh away’, and no sooner has the listener adjusted to the environment, then Bower throws out another layer of harsh distortion to addle the senses: see the throttling opener of the second disk, ‘Nibelungen’ and it’s Wagnerian companion ‘Rheingold’. There are even flashes of the grandiose orchestral vision summoned by label head and Neurosis member Steve Von Till, who described the record as “Wagnerian sonic bombast, a Nietzschean worldview". Hence, the chiming of ‘Starlit Mire’ and the abyss like depths of ‘Skar Constellation’ suddenly seem more gargantuan than they might have otherwise.

But for all that pomp and bombast, it does remain difficult to fully engage with a record like this, and Strange Keys… is never an effortless listen. Nor is it an entirely effective record: I might be missing the point somewhat, but the sheer power of a Skullflower live show isn’t fully transmitted by my comparatively weedy setup. Total immersion, which is what the record ideally merits, seems only achievable with a hefty pair of noise cancelling headphones, and even then, I’m lusting to feel the bass actually rattling the air inside my lungs.

That’s maybe more expressive of my feelings over how noise music transmits to a home or personal environment though, and Strange Keys…remains a fantastically powerful recording indicating that Skullflower continue to push further into the void and deeper into the abyss. It might not be a record I reach for frequently, but that shouldn’t undermine its merit. Punishing, unique and definitely not for the faint of heart or eardrum, yet simultaneously requiring the kind of meticulous concentration that was adopted during it’s creation, it’s without saying that this is a record that won’t convert any to Bower’s pagan cause. But I doubt he ever considered that as part of his mission statement.