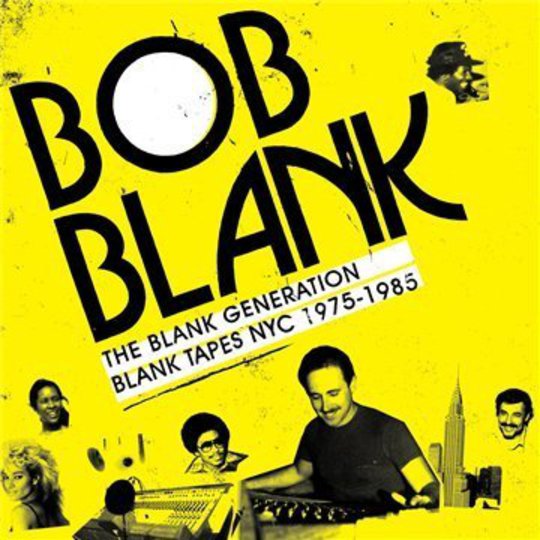 The Mutant Disco revival that emerged at the beginning of the last decade gave some long overdue credit to a group of diverse musicians who congregated in New York during the early Eighties. But one man seemed to slip through the cracks when the critical plaudits were being handed out, despite his near-ubiquity on the compilation albums that were swiftly glued together and shoved out. If you squint at the producer credits on those records, the name of Bob Blank crops up more often than not, his steady hand helping to guide and shape the dissident visions of Lydia Lunch, Sun Ra, Arthur Russell and August Darnell. Fortunately, someone at the excellent Strut label had their reading glasses on and has released The Blank Generation, a compilation of wildly disparate tracks that were pieced together in his Blank Tapes studio in Chelsea.

Stylistically, it’s all over the map, to such a degree that it’s a wonder Blank didn’t consider an alternate career in cartography. His roots in disco (Blank produced the proto-disco smash ‘To Be With You’ by Jimmy Sabater) provide a loose thread that ties some of these artists together, but there’s no singular aesthetic at work, no real desire to come up with a house sound or anything that could be described as a recognizable trait. Perhaps that’s why Blank remains a relatively unknown figure in the pantheon of legendary producers — he wasn’t a Martin Hannett-style figure whose fingerprints were smudged all over his work. Instead, he was there to provided an outlet after picking up a reputation as (in Blank’s own words) “somebody you could do something interesting or bizarre with.”

Blank’s love of disco and the thriving New York Latin scene are to the fore in the first two tracks here. Debby Blackwell’s ‘Once You Got Me Going’ is a raunchy, Chaka-Khan style stomper, powered by squelchy Moog and a synthesized string motif. It’s followed by the pattering percussion and feverish trumpets of ‘Music Chance’ by Charanga 76, which amply demonstrates why Blank was partly responsible for a couple of albums that won Latin Grammys. Sun Ra surfaces with the mid-tempo and (for him) relatively straightforward electric jazz of ‘Where Pathways Meet’, which is marked by warring guitar and sax solos that spiral into one another, only to be separated by gentle clinks of barroom piano.

Following Sun Ra are the brooding new wave-isms of the Necessaries — think sharp, angular guitars that tool away machine-like in the mix alongside angst-ridden vocals — and Lydia Lunch, who offers an instrumental showtune-in-the-gutter from her Queen of Siam phase. It’s amusing to imagine how Blank’s studio operated when listening to the spirited musical shifts this album makes. Presumably the producer didn’t tap throaty-voiced disco diva Mikki on the shoulder and play her a few tracks from ...Siam when he was working on the thwacking slap-bass of her much-sampled club classic ‘Itching for Love’.

But someone who would have appreciated such a crossover was Arthur Russell, who used Blank to help him bash the classic ‘Wax the Van’ into shape. The pair worked on numerous recordings during Russell’s brief lifespan, but ‘Wax the Van’, which was recorded with Blank’s wife, Lola, on vocals, is where the partnership really flourished. It has a classicism that’s rare in club/dance music, causing it to be both completely timeless and very much of its time, much like Derrick May’s ‘Strings of Life’ or A Guy Called Gerald’s ‘Voodoo Ray’. Here, it neatly segues into the closing song on the album, ‘Emile (Night Rate)’ by Blank’s pet project, Aurual Exciters, who bring Blank Generation to a close with a beautifully tranquil groove that devolves into subterranean after-hours screeching and coruscating off-key strings.

Listening to this album, it’s surprising how high the hit rate is considering how Blank’s cheap rates, open-mindedness and ability to get the job done seemed to cause every low-life in New York City to turn up on his doorstep to ask for a few hours of tape time. But, like all the best producers, he could intuitively bring out the best in the people he was working with, whether it was a bunch of scruffy no wave no-hopers with a rudimentary grasp on the mechanics of making music, or accomplished players like Hansel Martinez and Raul Alfonso from Charanga 76. It’s easy to over-romanticize music history, especially when hotly-contested embellishments blur into established facts with the passing of time, but on this album Bob Blank’s studio sounds like a constantly fascinating, ever-evolving, pulsating hive of eclectic musical creativity.