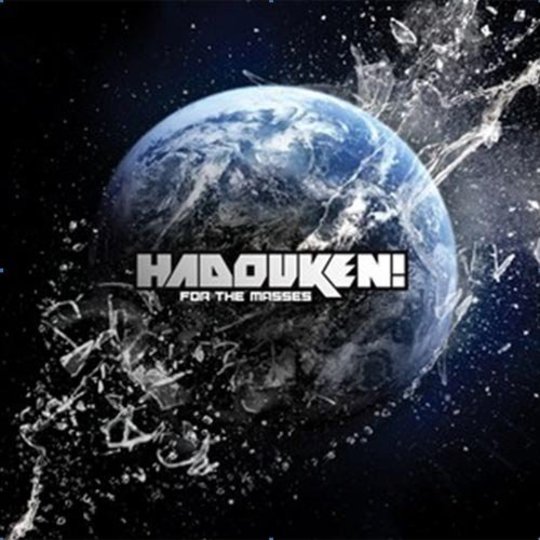 Many saw Hadouken’s debut album, Music For An Accelerated Culture, as tongue in cheek. Others saw it as the neon light to save us all from an over earnest musical abyss. This inevitable antagonism left the band with a whole shit load of ‘Marmite’ conundrums to deal with. What probably hadn’t been foreseen is how the band might return with a new impetus to stake their claim as ‘the great dance-rock bands of the century’. As vast as a statement as that may be, there’s certainly no use in them taking some sort of tangential alt-folk route now, so best stick to them smoking guns. The backlash had already come and gone, so to see them re-emerge at all, let alone with a self-made underdog image, is intriguing.

So, bringing in renowned drum and bass producers Noisia for production duties on For The Masses initially seems to have been a fair hand to play in order to try and to tie up that plethora of loose ends. With that call made, there’s no doubting that this second effort is a much darker and heavier proposition compared to the ‘Hoxton Hero’ and ‘Indie Cindy’ baiters of yore. Take lead singles ‘Turn The Lights Out’ and ‘M.A.D’ (make of that acronym what you will, the lyrics won’t do you any favours) as the powerhouse examples, all Wiley-esque hugeness in bass laden production coupled with chugging guitars and that ever-so grating emergence of lead synths. What’s immediately obvious, as with their first calls to arms, is that there’s no pallet of real emotion on offer, despite intentions to the contrary; they're now possessed of the powerhouse belligerence of some meathead whose girlfriend you've just accidentally spilt a drink over, now eyeing you up with a view to smashing you into next year. Not an altogether pleasant sensation to grapple with.

This aggressive tone is a constant throughout and pretty much breaks new boundaries in sounding absolutely ridiculous. And not the ‘good’ kind of ridiculous, as I’m sure fans of Hadouken! will include in their ambiguous modern lexicon. Tracks like ‘Ugly’ plough on with that same monotonous, chest bruising tone. But James Smith’s chants of “You take it on the chin/I’m gonna fuck your face up” and “It’s ugly like your sister” is hardly befitting of a band that have, apparently, matured. In fact it’s his god-awful squall that all too frequently detracts from the pretty obvious skills of the producers on hand. Sure, the whole album’s reactionary nature has left them no room for variety and the pounding from the Dizzee Rascal-having-a-heart-palpitation noise becomes unbearable.

A nostalgic take on Michael Jackson’s ‘Dirty Diana’ in ‘House Is Falling’ firms up the realization that For The Masses is not only unbearably monotonous but also entirely derivative. Even closer ‘Lost/////!’ (again, can’t explain the grammatical twinge, maybe it’s text speak?) sounds like a knock off Enter Shikari, once more showing inclination to pander more than a meander.

What Hadouken! will manage to achieve, though, is that place next to Invaders Must Die in many a CD wallet of the cars of 17-year-old new drivers with freshly installed subwoofers. They will still stand as a bastion of hope for those ‘kids’ with this unquenchable rage inside them. Their conversion from neon toting party killers to hoodie wearing emo troglodytes will probably make them darlings for young sociopaths everywhere. For those of us who know better though, Hadouken! are simply never going to be as respected as their adored influences.