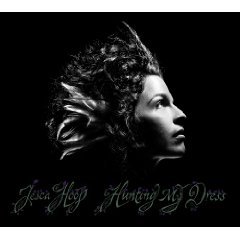 An album that is weirdly accessible, with a strange universality at its core. »

hoop remains her own invention and the appeal of her biographical details doesn't lie so much in the glitzy endorsement of waits as in the fact they chime so perfectly with her melding of kate bush sensuality and mary poppins whimsy... on 'whispering light' or 'four dreams', a winsome hoe-down line-dancing along a very wobbly line, it sounds as if english is her second - maybe third or fourth - language, her freudian fables and oddly archaic dream-speak translated from the original palimpsest via carrier pigeon and semaphore. yet when she shivers "i'm not a bird / i'm a murder of birds" on 'murder of birds', a hushed, lullabying duet with guy garvey of elbow (the band who encouraged hoop to move to manchester), it's clear that there's more substance here than fragile folk-kook feyness. 'murder ballad tulip' is shirley collins after a stint in a californian writer's workshop; the pulsing 'bed across the sea' displays a tough musculature under the layers of lace dresses, while 'angel mom' crashes into a red-lipped, kohl-eyed kate bush meltdown that sees her rivaling fellow head-dress fan natasha khan for cosmic oddity. "when i was a young girl i would sleep in a tall tree," she sings on the title track. it's easy to forget the official biography and believe she's right. friends in high places never hurt, but jesca hoop hits the heights all by herself.
description from www.roughtrade.com