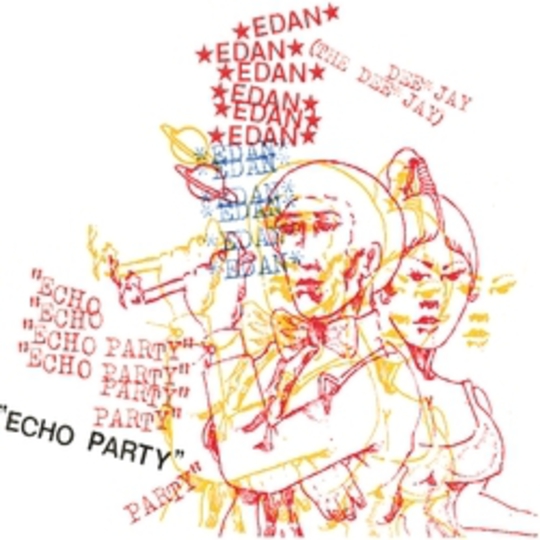 There are times in a man’s life when he just gives in to all his inhibitions and cuts loose. Maybe it’s three tequilas too many, maybe it’s that girl across the room or maybe it’s the fact that the DJ is spinning something so ridiculously, infectiously, joyously rhythmic that it’s all he can do to prevent himself from literally spasming across the floor. I had that moment at an ATP festival, back in May, on a Friday night, and whilst I can’t confirm whether reason two had any part to play, I can verify that I had been drinking and more importantly, that Edan was on the decks.

Many will be familiar with Edan in his capacity as an oddball hip hop performer: his 2005 record Beauty and the Beat delighted casual fans and hardcore ‘heads alike. But surprisingly, he’s less well known for his mixtape work. A devotee of the beat in all its forms, he’s just unleashed a 29 minute mixtape, based exclusively on material found in the Traffic Records archive.

The reason Echo Party might have been so named is clear from the first listen. Well, to be more précise, a few reasons become clear. Firstly, the abundance of percussion pulsating throughout the seamless compilation literally seems to bounce around your head: from funky drummer breakdowns to chopped up kick snare patterns, this is a record for beat nuts. Secondly, the music sampled seems to reverbarate through the decades: Seventies funk licks filtered through future disco bleeps, spliced with old school hip hop cadences and underlaid with those amazing drumkicks. Thirdly, as made clear by the eternally irritating promotional voiceover, like the much heralded Dam Funk, he’s taking retro concepts and warping them into the space age, via way of echoes and delays.

But to describe his craft as that simple would be to do the man a huge disservice. Edan, being the creative spirit that once created an entire mixtape of songs sampling James Brown’s 'Funky Drummer' beat, isn’t content to let it rest there. Into the mix go humming and throbbing Eighties synth lines, chickenscratch guitars, xylophones and even a kazoo solo. The fact that it all works so well together is testament to his skills: He’s turned the mixtape into a veritable playground of soundscapes, shifting between styles and beats as effortlessly as a racing driver changing gear. Whether he’s reversing a vocal sample, or cutting up a drumbeat and bouncing from left to right channel, basketball like, it can only be imagined that he’s doing so with a grin on his face akin to that of a child let loose in his favourite candy store, yet a child armed with a very precise and well ordered shopping list.

And that’s what makes Echo Party so enjoyable outside of a club environment: far from succumbing to the simplicities of a simple mash up record or a standard mixtape, Edan has created a flowing, evolving piece of music as liquid as the basslines he’s so fond of sampling, that has never yet failed to bring a grin to my face. Get up and dance already.