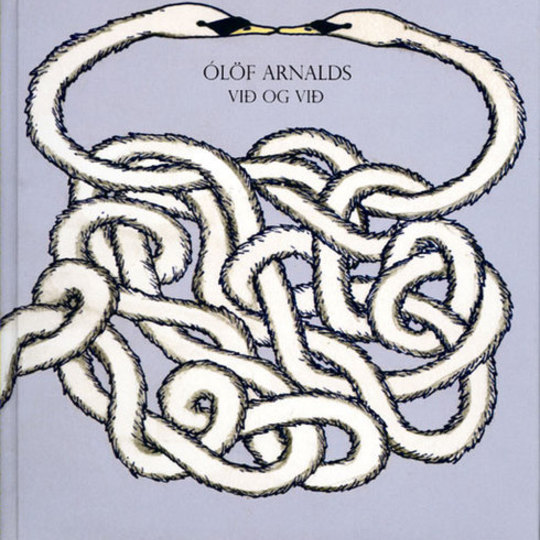 One recurring theme with Nordic artists appears to be that their records get released over here on average two years later. This is the case for Icelandic folk-maiden Ólöf Arnalds' debut, Við og við, which was originally set forth unto the world in 2007. It feels borderline redundant writing about an album which has already sailed triumphantly through the airwaves, and one which has attracted praise wherever it's been released. However, there'll be many fresh ears who either a) haven't heard it or b) get her confused with her male namesake, Ólafur Arnalds, so here we go.

It seems that every time I sit down to write a review about a Nordic or Scandinavian artist I want to bang on endlessly about The Language. Usually the argument is that it's disappointing that the native tongue is underused or, in many cases, not used at all. Those languages, and especially Icelandic, have a quality largely unfound in English, especially the way most use it. There's no difference here. It may be the languid nature, it may be the way it's spoken and sung – appearing like a mythical or lost language, a remnant of the past and, the way Arnalds uses it, dreamy. She may well be singing about burgers and chips, but to my ears, it possesses a childlike quality transcendent of any real meaning, but the initial appeal only really pricks the surface, it is, after all, but one element.

Despite the well-constructed acoustic laments, of which there are many, Við og við is not an exciting record. It is, quite possibly, one of the least exciting records you may ever hear. That's patently not its intention, but it makes it a hard album to actually listen to as its opening dents drift interminably. There exists a fine line between getting lost in the music, and the music losing you, and on this record, there's more of the latter than the former. We hear both sides of the spectrum in the one-two combination of title-track 'Við og við', an unwieldy five-minutes thirty-nine and 'Orfeus og Evridís', two-seconds shorter but infinitely greater in all aspects, start to finish as it does everything which the its neighbour threatens to. Despite the fact that you can almost hear the grass grow around you as it meanders along, Við og Við is a really 'nice' record.

It may be damning with faint praise to ever use 'nice' to describe any serious music, yet it's the instrumentation, or lack thereof, which renders a feeling of impotence. So little and sparse is each arrangement, that there can be truly few things which come close to being unpredictable or surprising. On the contrary, the bare bones approach to all found within constitutes much of the appeal, and the delicacy and purity of each section serves to counter point the predictability. Where proceedings are given a touch of dynamism and variation, it just about starts to feel complete. 'Náttsöngur' takes serenity to new levels, and is brought to life with the simple addition of a muted trumpet and strings, both working a wonder. By the time the lap-steel aided, slow-forming float-fest 'Skjaldborg' and the heavily-harped tenth-track closer of 'Ævagömul Orkuþula' have passed, it's all over.

Við og Við is a record I want to like; but it's too much an unrewarding, hollow listen. It feels like there's nearly always something missing, a connection, perhaps a link from the music to the personal. The general ambience is one of potential which is largely undeveloped, or underdeveloped at best. As the quirky Icelandic phrasing and Arnalds' affected vocals decorate only lightly, there lie works which are begging to be finished and made whole. A record of wispy warbles and minor-key acoustics needs to have the gaps filled in, and Við og Við is living proof of both how and how not to.