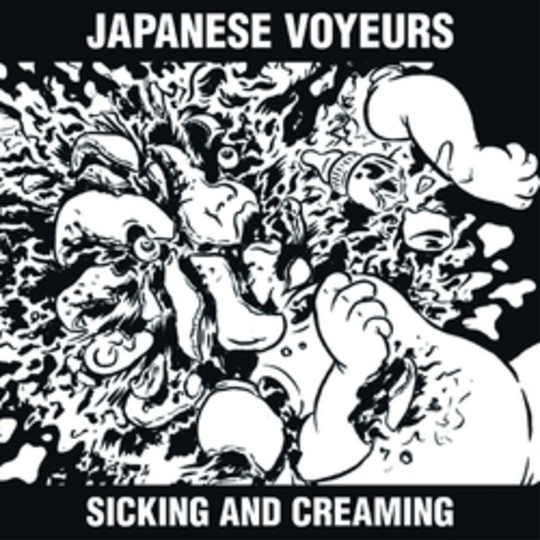 'EP'? Shit off, kids - I wasn’t born yesterday. In fact, being semi-ancient, I’m quite convinced I can recall some sort of golden era wherein the suffix ‘EP’ was more or less a tacit apology for any release skinnier than eight numbers. On that basis alone, I’m calling London-based spaz-grunge revival quintet Japanese Voyeurs out right from the get-go.

Sicking and Creaming, visceral and lewd and faintly thrilling though it may be - and in fact is - clocks in at a fag-break-friendly three tracks, and as such ought really to be touted as a generous seven-inch at a push. You’d immediately expose yourself to the exact same number of their songs (only one of which isn’t actually on the CD, come to think of it) by logging in to the London-based quintet’s MySpace page, ferchrissakes. 'EP,' my distressingly foreshortened arse.

In retaliation for this egregious display of musical miserliness, it’s tempting to deliver a review shorter than a skint hobbit. Japanese Voyeurs make this a tricky feat to pull off, though, largely by sounding like so many other bands at once that it’s impossible to stem the flow of knee-jerk references. Seriously, ploughing through Sicking and Creaming alongside mates of a certain age rapidly descends into a ludicrously nerdy game of early-Nineties musical Guess Who? Happily, it does so in a good way; a very good way indeed.

Various observers have picked up on the fact that Japanese Voyeurs cite Kyuss as a key influence, subsequently attempting to shoehorn Josh Homme’s early-Nineties stoner rock stalwarts into the Sicking and Creaming equation. If after listening to this EP you somehow come up short of comparisons (for which there can be precious few excuses, let’s face it), Kyuss may just about fit, but certainly not well enough to scream out.

What do scream out, however, are singer Romily Alice’s vocals, and in doing so they provide an instant Marmite scenario: you’re either going to love her thrillingly throaty, frequently atonal, FOR THE LOVE OF CHRIST WILL SOMEBODY OIL THAT COFFIN HINGE delivery, or you’re going to think she sounds worryingly like a cassock-wearing Katie Jane Garside disciple. For what it’s worth - and in reviewing terms, it’s worth nothing - I've got one foot planted firmly in each camp.

Lead track ‘Dumb’ really isn’t: it’s actually almost confoundingly knowing, bobbing in on a raft of influences so populous (Nirvana, Babes In Toyland, the afore-referenced Daisy Chainsaw) that it threatens to capsize before the minute is up. It stays firmly afloat though, thanks to a frankly shitkicking volley of power cords and some achingly genre-tweaked, nails-down-a-blackboard caterwauling from Alice: “Mary, Mary, Virgin Mary / Sitting with your legs crossed / Don’t you ever just wanna take that habit / And rip it right off?” It’s 1992, people, and moderate sacrilege is taboo again; moreover, it rocks as hard as ever.

Mid-sitter ‘X-Ray Ted’ is a low point, scratching neither the riff-hungry itch that ‘Dumb’ satisfies, nor scaling the ironic heights that off-kilter wonk-rocker ‘You’re So Cool’ achieves in drawing things to a premature close. Worthy of note is the fact that the latter manages to cram in something approaching a middle-eight, and one strewn with squealing pinch harmonics - as if collapsing into the very eye of the influence/throwback debate itself - at that.

And then it’s all over, kaput; slumped lifeless in a garage outbuilding with a shotgun hole through its chin. Is it fun? Fuck yes. Is it ‘good’? Well, that rather depends. Principally on how many early-Nineties MTV2 bands you’re into, and whether or not you’re disappointed that Nine Black Alps have thus far been pretty much the only have-a-go-heroes obviously frantic to resurrect them. I for one welcome our new Seattle-lite overlords, but without wanting to end on too clanging a cop-out, Japanese Voyeurs offer a masterclass in ‘mileage may vary’ alt.rock.