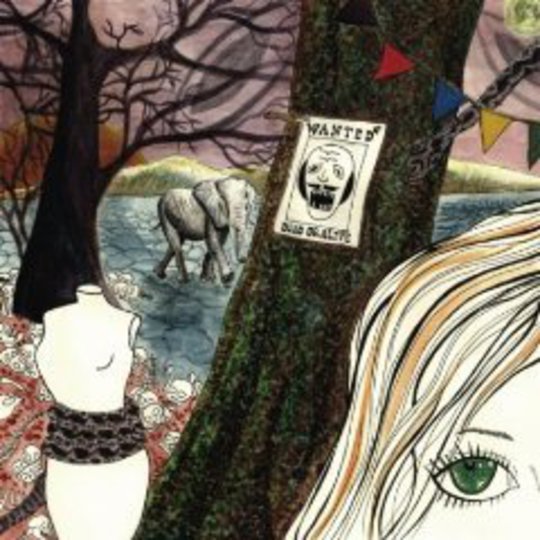 The Witch And The Robot is a weird name for a band. On Safari is a weird name for an album. Let’s face it; calling a song ‘You Already Know All There Is To Know About Time Travel (Just Look At The Stars)’ is also a bit weird. Clearly then, the sleeve of this album in no way conceals the treasure trove of oddities enclosed within.

Somewhat fittingly then, the album begins with a fuzzy recital of a familiar childhood idiom – “Divorced, beheaded, died/Divorced, beheaded survived” – before the bass clunks into gear with a restrained fury and mind-bending simplicity which TWATR seem to have borrowed from fellow Cumbrians British Sea Power. But there is more. ‘Giants’ Graves’ is uniquely enchanting, with its folky guitars, flamboyant percussion and hypnotic chants. It swells, it disappears to nothing, it repeats itself over; but with such a warped conglomerate of timbres, it never falls flat for want of progression. The song is a progression of itself.

Throughout On Safari, TWATR proudly display their folk influences, which glimmer magnificently as they evoke the landscape of the Lake District. What’s important however, is that they capture something much more profound than a picturesque postcard snapshot of Windermere. They take all of the mystic spirituality of the landscape that surrounds them, and inflate it into a whole other world for them to explore. “I’ve lost days watching trees moving in the wind/It can be the best free show here on Earth,” goes ‘The Best Free Show On Earth’. It’s hard not to be convinced.

‘A Crocodile Song’ takes a different route through the forest. The guitars are firmly plugged in and crunched up, to create something sinister, draped with fear and almost unsettling. The deliciously lo-fi chorus falls without warning from the trees, with a noisy pagan bravado. TWATR change track again on ‘No Flies On Me (Ballad Of The Jam Head)’, led by eerily whimsical vocals, tensely plucked chords and ominous clicks.

The breadth of approach and scale of ambition evidenced by On Safari mark TWATR out as innovators. Ideas and inspiration seem to come to the quartet like respiration comes naturally to the rest of us. Where the album is perhaps lacking is in consistency. With such a broad scope, spanning pseudo-traditional ballads, spoken-word surrealism and folk-rock freak-outs, ‘On Safari’ can be a little exhausting to listen to as a complete work. One minute you’re contemplating Thomas Aquinas; the next, a twisted puppeteer is the topic – it’s a little overwhelming.

But that’s only if you’re really picky. On Safari works as an album, exactly because it is so bold, and gives the folk tradition a twenty-first century kick up the arse that it has needed for decades. TWATR might be weird, but their music shows no sign of arrogance, is provocatively hypnotic without being over the top, and lyrically, shows you another world without isolating you from it. By the end of the album, their Cumbrian safari-world feels like home. The hard part is finding your way out of the forest and re-engaging with reality.