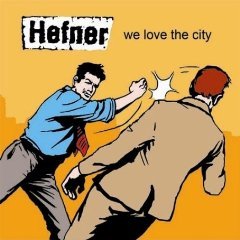 Hefner - We Love the City (reissue)

We Love The City isn’t Hayman’s masterpiece – that was previous LP The Fidelity Wars. Still, it’s a high watermark in the career of an underappreciated talent.»

we love the city was hefner's commercial and creative peak. having cleared a large backlog of songs on the band's first two albums and various b-sides, for their third darren hayman wrote a new set of loosely themed songs about love in the capital city. we love the city eschews the band's former broken indie-folk sound in favor of a bouncy, urban, blue-eyed soul and an expanded line up including hammond organs, wurlitzer pianos and brass sections. songs like 'greedy ugly people', 'good fruit', 'painting and kissing' and 'the day that thatcher dies'are typical examples of the direct, infectious, intelligent style that endeared hefner to so many. the album's narrative is conceptual and played out by a retinue of vividly drawn characters, but at heart this is hayman's most personal and focussed work. always championed by john peel, promotion for this album culminated in a full, real time performance show session, broadcast live from bbc maida vale (now available else where as the album maida vale). this two-disc set expands the original album set to a mighty 39 songs including all of the relevant b-sides, substantially different alternate versions and surprising remixes from electric sound of joy, piano magic and the wisdom of harry.
description from www.roughtrade.com