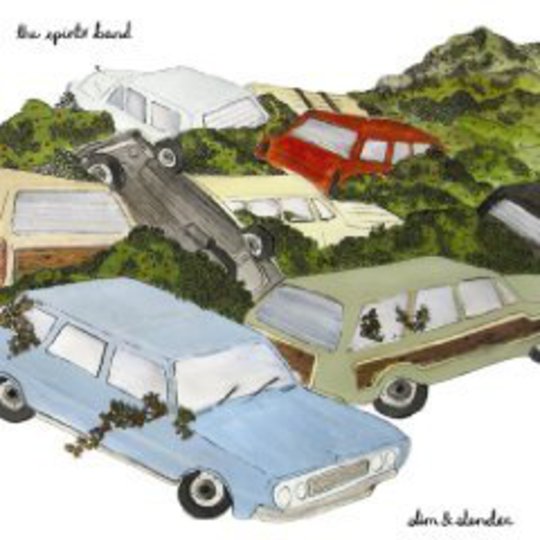 Most of the time, The Spinto Band’s artfully choreographed if rather safety-conscious melodic firework displays burst prettily into the indie-pop firmament to a light rippling of “aah”s - a couple of them gratingly ironic, inevitably - and then fizzle, glittering, leaving you with a warm glow and a feeling of for-better-or-worse certainty that nobody will be chucking a full aerosol on the bonfire this year.

Every now and again, though, you experience a reckless hankering for one of the roman candles to implode catastrophically, showering the crowd in jagged shards of smouldering plastic. In shorter bursts, this has no detrimental effect whatsoever, but whole albums in a single extended session can leave you itching for a little less “aah” and a whole lot more “ooh”.

The four-track, sub-11-minute Slim & Slender EP is just that: slim, slender, very much a single-serving portion; ostensibly ideal for those with a lower tolerance for weapons-grade whimsy. And, on first listen, it’s not overly prettified, which implies that the 2010-scheduled album it heralds might see the band adding a welcome spoonful of grit to the mixture this time around. What’s certainly different here is the production: Park the Van take great pains to stress that Slim & Slender is the first thing The Spinto Band have recorded entirely under their own steam. Whether or not that’s necessarily a good thing, though, isn’t quite so clear-cut.

Opening track ‘Jackhammer’ is the best thing on here, harbouring a shoal of skittish, fragmented guitar noodles that dart around fretfully like minnows at feeding time. Some lushly interwoven harmonies soon look as if they’re readying to launch a full-scale shimmer-fest of a chorus, which makes the ecoing, oddly reedy wail that eventually turns up all the more unexpected. It’s not ineffective - it just doesn’t pull back, swell and then dash itself over the bridge in the way The Spinto Band have taught us to expect it to. I don’t know whose fault this misunderstanding is. Probably mine.

‘Brazil’ is a half-instrumental, half-vocalised cover of the title theme from director Terry Gilliam’s eponymous study of a howling near-future dystopia. In the Spintos’ indefatigably jaunty hands, it becomes even more incongruous than the original - the opening, vocal-free half comes across like a soundtrack for Tony Hart’s ‘Gallery’ segment on a week for which the ill-advised topic was 1970s end-of-the-pier smut. Next up, ‘Keep Them Alive’ is pretty much on a par with 'Jackhammer', and again features an unexpectedly downbeat chorus that sits ever so slightly off-kilter with the rest of the tune. It’s got something to do with the unusual production values again, the vocals riding curiously high in the mix as Nick Krill’s oft-cited David Byrneisms bemoan a majestically trivial stroke of misfortune via standout lyric “this piece of fibre doesn’t match.”

Harmless instrumental ‘Thayer Function’ winds things up in neatly disposable style, powered by a nice little acoustic motif ping-ponging its way woodenly along throughout. The drum sounds are downright freaky though: the trebly stick-work is snappy to the point of sounding like a lobster attacking a clog, while the low-end reminds you of nothing so much as the chilly rumble of a tenement neighbour letting one go in the bath.

All in all, Slim And Slender is an intriguing little gap-filler that, despite the subtle hints at a slightly more mature Spintos album to come, is pretty hard to quantify on its own. On the one hand, there’s not quite enough here to really grab me; on the other, I’m now pretty darn curious about what the said album will sound like. Ironically, then, perhaps a little too much “ooh” and not quite enough “aah”. There’s just no pleasing some people, is there?