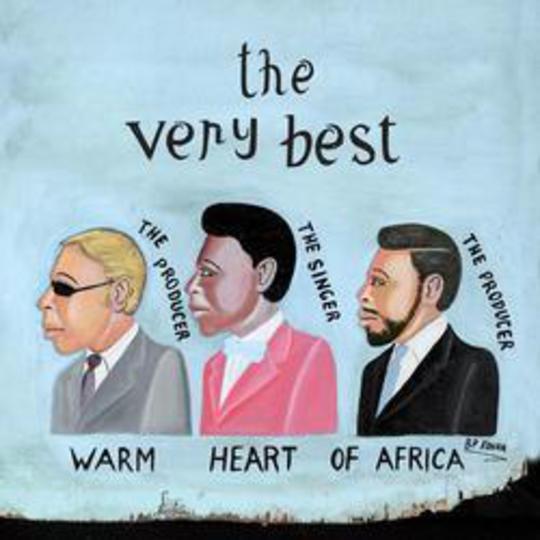 Indie bands love to pretend that they’re something special, that they’re not just another plain old group of boys with guitars and a Smiths records. They like to claim that 'we’ve always had a dance element'. They love to pretend that they listen to lots of different types of music, throwing around fancy, obscure genres that bear little relevance to what they actually sound like. One of the latest to namedrop is afrobeat; plenty of bands in the last year have professed to being largely influenced by music from Africa. More often than not, what it really boils down to is that they once borrowed their dad’s copy of Graceland. So it’s with some trepidation that we approach The Very Best, a collaboration between East London based blog house production duo Radioclit and Malawi born musician Esua Mwamwaya. It certainly reads like a recipe for disaster, an ill thought out experiment destined to be the token world music guest on Later With Jools Holland, but somehow, against all odds, it works.

The key to this unlikely union lies within the rhythmic understand of the two components, namely Mwamwaya, who began his musical career as a drummer, and the embarrassingly named Radioclit, responsible for production duties. Understandably, the former knows that the key to afrobeat is the beat (the clue’s in the name) followed by the hooks. It’s almost an understanding of music at its most basic form, voice and drum coming together to create something stirring, uplifting, joyful. The second faction seem to understand this more than your Africa-influenced indie bands; as with afrobeat, the key to faceless electro lies within its rhythms, its beats; if they fail to get you dancing then they’re failing at their most basic function. The Very Best manage to tap into this almost primal understanding of rhythm as music; they understand that the key to success doesn’t lie with the guitars but with the drums.

Take for example Vampire Weekend, a band that have professed a love of African music, and one whose lead singer helpfully guests on Warm Heart of Africa. The problem with Vampire Weekend is that their songs rarely swing, that they come across as very rigid, as lacking of any real feel or movement. Comparatively, The Very Best manage to match Ezra’s spiky guitar and yelped vocals with a much more flowing groove, one that equally highlights his afrobeat influences and also his own bands shortcomings. Really, it begs the question of why can’t Vampire Weekend write a song this good.

At this junction, it would be worth mentioning the other guest appearance on Warm Heart Of Africa. Despite her own work suggesting an understanding or knowledge of world or African music, M.I.A.’s contribution marks the lowest point on the album. Her vocals on ‘Raindance’ seem somewhat lacklustre and phoned in, lacking the punch that’s required to really stand out, coming across as awkward and forced, especially when juxtaposed with the natural sounding vocals of Mwamwaya. She comes across as a tad bored, and joyless. Most of these songs sound like a celebration; ‘Raindance’ sounds like a hangover.

Jokes aside, Warm Heart Of Africa does feature a song that really does sounds like Paul Simon. The keyboard stabs of ‘Chalo’ have so much in common with those of ‘You Can Call Me Al’ that it’s almost lawsuit worthy, though it still manages to avoid sounding like it’s stuck in the Eighties. It’s a thread that runs through the entire record, this ability to use influences that were name-dropped 20 years ago in the same way today, yet make it sound completely of this era. It’s as if The Very Best took a collection of the best modern pop records, played them to a group of African musicians, and then got them to completely re-record them. ‘Kada Manja’ takes Ne-Yo’s ‘Closer’ as a blueprint and runs with it; ‘Mfumu’ is Robyn’s ‘Every Heartbeat’ re-imagined; elsewhere there are flirtations with T-Pain style autotune and halftime drums (‘Angonde’) and distorted bass synths (‘Julia’). What is the greatest surprise of Warm Heart Of Africa is how well all these styles mix with Mwamwaya’s vocals. Where you’d expect a chalk and cheese relationship between the two factors, instead you get a great collection of joyful party jams. They know their strengths and they play to them. When you consider the current crop of supposedly afrobeat influenced indie rock, Warm Heart Of Africa is, if you’ll excuse the pun, The Very Best.