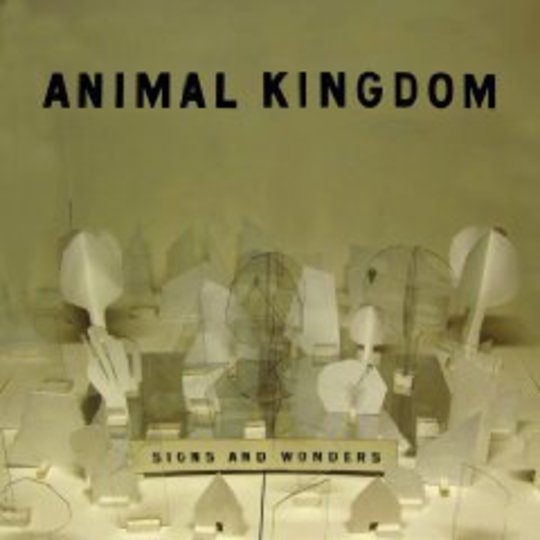 “Music is cyclical” someone said to me, for the umpteenth this year, as we watched La Roux proving his point at the Mercury Awards. But while most people seem pretty immersed in using the Eighties as leverage for mainstream penetration, some haven’t forgotten the gap caused by the death of 'landfill indie'. It’s been almost two years since the Pigeon Detectives could last command a decent appearance fee, long enough for people to dare hope that this forgotten cycle wouldn’t come to pass. And yet, here Animal Kingdom’s Signs & Wonders sits before me; a major-label signed throwback to the turn of the millennium, when Britpop - that last great mire of landfill indie - was replaced by earnest, well-learned types, who aimed for the stadiums by churning out solid, empathetic anthems that offered none of the machismo bravado of their coke-fuelled Cool Britannia counterparts; instead admitting that, hey, male musicians could be vulnerable too y’know?

Signs & Wonders suggests that this time round, those abroad may prove the catalyst for a new breed of British strum-and-weep bands. The London quartet’s debut is smothered in a sheen of glossy Americana-lite; an obvious result of recording in Seattle with Phil Ek, but also a concession to the stratospheric cross-Atlantic success the likes of Fleet Foxes and Bon Iver have enjoyed this past year. Ek produced Fleet Foxes, but it’s another of his employers, Band Of Horses, who Animal Kingdom share more in common with. It helps that in Richard Sauberlich, they have a more than passable Ben Bridewell impersonator; the vocalist’s high airy tones, though, have an energy-sapping effect across Signs & Wonders. Their lack of depth or urgency soon begins to grate; if you ever wanted to hear a grown man wishing that he “could get you off my mind, things’d be better”, you wouldn’t want to hear it in this whiningly wet miaow; get some cojones man! ‘Silence Summons You’ is the worst offender, though in ‘Mephistopheles’- a cryptic crawl through A Level Classics - Sauberlich aims for dark and brooding, and still sounds, well, like he does everywhere else. In fact, drenched in irrepressible reverb, it’s akin to a small child lost down a cave; a sensation that stadium-aiming Animal Kingdom may yet actually experience.

The songs, ahh the songs...well there’s definitely some, the trouble is that, after close to 20 listens, I’m still hard pushed to hum even one of them. Snapshots briefly appear; an intro that sounds like Razorlight...a slice of vacuous sounding up tempo-Indie (that’s Indie in the 2000 sense), ‘Good Morning Mr. Magpie’… an introspective fumble over a piano-led rumble, with Coldplay/Editors-like aspirations… little of substance though; nothing that reveals itself after repeated listening. Coldplay, derided in some quarters though they may be, have hooks. They know where the demographic-embracing points are in their songs; the bits where people will sing along, or raise their phones in the air. Animal Kingdom want but have none of this; occasionally, on ‘Into The Sea’ for example, they try, with some pounding piano chords and a simple guitar hook bouncing over the top. It’s done with nothing like the conviction of their more celebrated contemporaries though; tracks like wannabe-epic ‘Chalk Stars’ come across more Contact-era Thirteen Senses than A Rush Of Blood To The Head. Such lack of assuredness isn’t unsurprising in a debut, but when The Guardian claimed that the four-piece “could be the first stadium-rock balladeers it’s okay to like”, they had a point. It feels that this album, much like Coldplay’s Viva La Vida, is constructed for commercial success, but with an anxious glance at, well, the likes of us.

As if to prove this point, the one bright spot on Signs & Wonders, ‘Yes Sir, Yes Sir’, looks to Radiohead, British guitar giants that even Chris Martin and co aspire to equal. A surprisingly jolting guitar riff appears straight from In Rainbows before wigging out in true ‘Paranoid Android’ fashion; it’s a moment of genuine urgency in an album that’s otherwise severely lacking. That’s not to say it’s wholly unpleasant to listen to, but since when was being ‘pleasant’ enough? If this is a portent of things to come then Animal Kingdom will likely find themselves arena-bound by next year; it may not be though, and besides, they should always remember that for every Coldplay there is also a Haven.