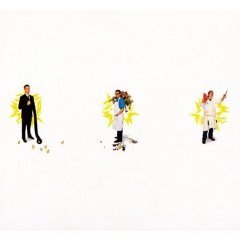 Like his father in jazz before him, Tyondai is furthering the cause of the pop experiment. »

for more than a decade, tyondai braxton has fine-tuned his unique approach as - quite literally - a solo artist. working by himself on stage and in the studio, he employed guitar, voice, looping and delay pedals plus various found objects to create work that simulates the sound of a large ensemble. on his warp records debut and second full-length solo album, 'central market', braxton has composed for a real orchestra (the wordless music orchestra, perhaps best known for their performance of jonny greenwood's solo compositions) for the first time in his solo career. the result is an exhilarating mix of acoustic and electronic instrumentation; surprisingly pastoral moments give way to more clangorous passages that will immediately appeal to fans of avant-rock quartet, battles, of which braxton is a member.
composed, arranged and produced by braxton, the 7-track set features guitars, vocals, electronics and percussion, unified to create orchestral music re-imagined for the 21st century, and perhaps the 22nd as well. 'central market' introduces braxton as an exceptional addition to the world of new music composers, while maintaining a strong hold on the poly-rhythmic and technically awe-inspiring creations he is already known for.
description from www.roughtrade.com