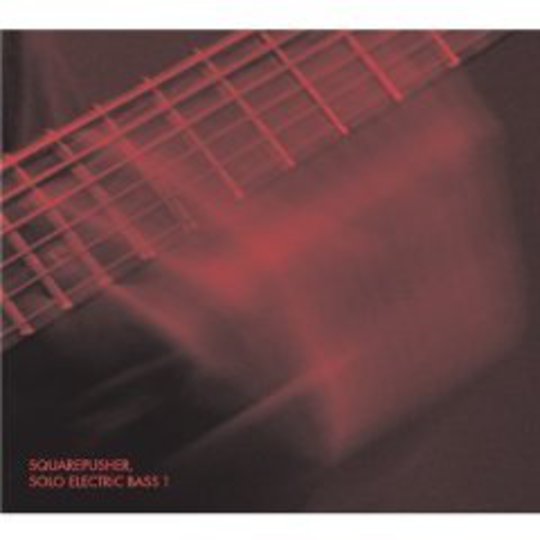 Tom Jenkinson’s process of disentangling himself from the world takes another step forward on Solo Electric Bass 1, his latest outing as Squarepusher. The performance is exactly as the title suggests — Jenkinson, alone with his bass, playing in a club in Paris, committed to tape in September 2007. It’s a lonely album, recorded at low volume, with playing that crawls to a whisper and then bloats into a puffy slap bass fracas. Music recorded in solitude often has a particular quality, a feeling that the rest of the universe has been quarantined so the creator can chase perfection around a studio. Here, Jenkinson takes his most introspective music to date out into the open, allowing an enraptured audience to whoop, cheer and applaud as he quietly retreats into his own indulgence.

That Jenkinson is an accomplished player is in little doubt. The full pelt Flea-funk of the closing ‘S.E.B. 12’ sounds like a hive of bees are violently pursuing him around the stage, while the opening ‘S.E.B. 1’ and ‘S.E.B. 9’ are placid bass strums that twinkle into folky laments. The first third of Solo Electric Bass is surprisingly pleasant; the speedy melancholia of ‘S.E.B. 4’ is even reminiscent of some of Jeff Buckley’s guitar playing on Live At Sin-E. Most of the tracks run into each other, with Jenkinson offering little pause for thought as he jumps from saturnine self-absorption to cheeky bilious monster riffs, often in the space of one song. ‘S.E.B. 6’ covers a mind-boggling array of styles, including caustic slap-heavy abrasiveness, ruminatory inward-looking plucking, and the kind of blubbery miasmic jitter runs that often punctuate regular Squarepusher recordings.

As the album progresses, Jenkinson begins to wring impossible spaghetti-like patterns from his bass, the sound wobbling all over the place, everything moving so fast that it feels like the instrument has wrestled control of his fingers and won’t let him stop playing. He clearly has a thing for inanimate objects. On Just a Souvenir he wrote a genuinely funny paean to a coathanger, and Solo Electric Bass 1 pans out like a love letter to his favourite instrument. Listening to the album feels like you’ve just walked in on someone indulging in a spot on onanism, but instead of looking up shocked, Jenkinson just ploughs on, his ardor for the task at hand causing him to block out everyone around him.

Naturally, every good masturbation session requires a climax, and that’s where he falters. The tracks on Solo Electric Bass 1 are all build-up, no pay off. Nothing ever really goes anywhere. There are little peaks and troughs, but the songs often end up heading down blind alleys and frittering into nothing. As such, it’s somewhat consistent with his other recorded output. Most Squarepusher albums start well, with Jenkinson dropping tracks full of promise (‘Squarepusher Theme’, ‘My Red Hot Car’, ‘Star Time 2’), things fall a bit flat in the middle, and by the last few songs it feels like he’s desperately short of inspiration.

The key difference here is the inspiration never really arrives in the first place. The playing feels like it’s been ripped straight from an episode of the much-maligned Eighties BBC TV show Rock School, with Jenkinson dressed in a comfortable sweater and brown flared cords, his Slap Bass 101 students eagerly jotting down complex chord changes as they struggle to keep up with the blur of fingers. It’s turgid stuff for the most part, a functional demonstration of Jenkinson’s capabilities. This is also consistent with his other work — there’s rarely ever any emotional involvement. It’s all technically proficient, impeccably arranged and occasionally a bit of a laugh. But Jenkinson always stops short of infusing anything genuinely moving.

Perhaps that’s a problem inherent in music made in isolation, that need to know when to hit the pause button and rein in impulses that sound amazing in the fug of 3 a.m. weed smoke. The concept of a solo bass album feels like another one of those ideas, and while there are fleeting moments of inspiration, Solo Electric Bass is a cavernous black hole that is mostly devoid of anything truly affecting.