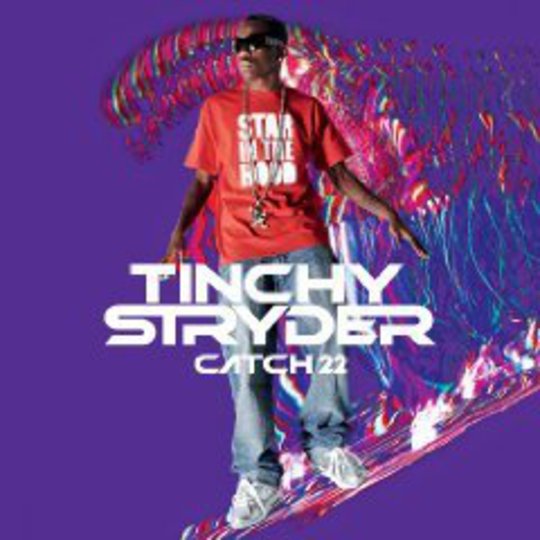 You could be forgiven for thinking Catch 22 is Tinchy Stryder’s first album. It features the singles ‘Number 1’ and ‘Take Me Back’, which charted at number one and three respectively. It also boasts his latest single ‘Never Leave You’, featuring Sugababe Amelle, which just entered the charts at number one. It even showcases last year’s single ‘Stryderman’ – a song that only made it into the charts for two weeks, reaching number 73 before dropping out of the top 100.

It’s actually his second LP. He released his debut Star In The Hood in 2007 and an EP in 2008 called Cloud 9. All led to critical acclaim (he was nominated for a MOBO award as Best UK Newcomer in 2007 and Best Video for 'Stryderman' in 2008), but they sparked no real commercial awareness or success.

Now the 22-year-old, dubbed Tinchy because of his 5’3" stature, has assaulted the charts like no other grime artist this year. With such strong singles behind him, it would hardly be delusional to hope for a fantastic album that would support his new-found stardom and prove himself to be the Prince of grime that people are hailing him as.

Catch 22 is long - 18 tracks to be precise – and incredibly inconsistent, the all-too familiar sound of a set of solid singles surrounded by filler. Certainly it's questionable how well it stacks up against Star In The Hood.

Let's make one thing clear: Stryder is fantastically talented at writing choruses. Every chorus on every song has been swirling around my head since the first spin. But it’s the verses on his weaker songs that let the album down; many feel long and drawn out and lacking in hooks, even though they’re uniformly shy of four minutes.

The first song to skip is ‘Shake Me’ - a prime example of a good, catchy chorus let down by less than exciting verses. Half way through the it's all become very repetitive, from the chant of "because I need someone to shake me/It feels like I’m in a dream" at the start of every chorus, to the six note riff that sporadically appears throughout. After two minutes you really have heard it all. ‘Warning’ could be a carbon copy of ‘Shake Me’ and suffers from the same fatal flaws.

To be more positive, there's some fine sampling on the record. the highlight being ‘Express Urself’ - a fresh take on NWA’s remix, and the most upbeat track on Catch 22. Stryder’s lyrics and rhythm keep the song up-tempo and give it a beat that even his critics’ heads would bob along to. ‘You’re Not Alone’ is based around a clip of the hit of - yes - the 1996 same name by Olive. The contrast between the original instrumental and Stryder’s rapping really is a beautiful thing.

‘Halo’ is the only unqualified success not to feature a sample or another artist on it. "Don’t get stuck in my halo/coz you don’t want to let go" and "Why you standing over there/when it’s poppin’ over here" probably aren't his finest lyrical hour, but's a genuinely exciting tune, one that doesn't need to frisson of a Nineties sample or, um, N'Dubz to keep you interested.

Generally Stryder's straight solo tunes simply don’t compare to the samples or collaborations that make up exactly half of his album. It’s not that they're a complete flop, it’s just that they're noticeably not his stronger moments. He’s like the Mark Ronson of grime – skilled at re-working classic songs or spotting the tracks where collaborations allow a tune to really take off.