The Sand That Falls 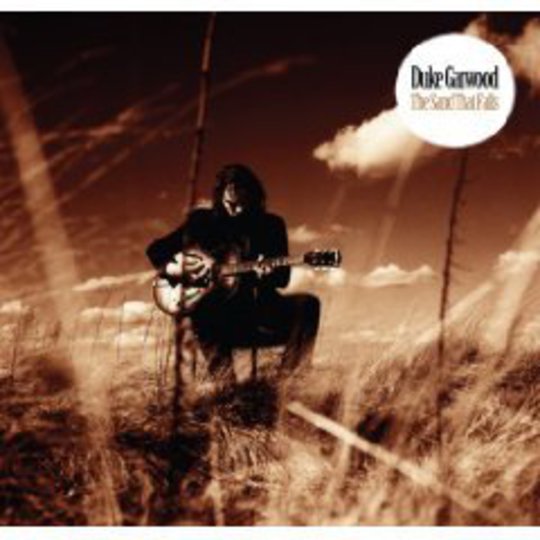 I like picking up instruments I don’t understand. And doing things that may sound foolish at first. It’s like giving a blowtorch to a monkey. That’s what I’m trying to do. Always trying to break something, break something, break through something… [I’m] Trying to do things with just the essential elements of music. It’s like making ashtrays: just put three grooves in it and call it an ashtray. I found a great room to work in; it’s just a cement floor and a hot water heater…It’s got some good echo

As The Sand That Falls scrapes and shuffles by, these are sentiments you assume Duke Garwood would approve of, so much so that you could slap them on a press release, mark them as his own, and imagine that few but by-the-book Waits-o-philes would have cause to question their authenticity. On this, his third album, London-born Garwood has created a brooding, taciturn record that often strays closer to being an assortment of sounds than a collection of songs, an exercise in seeing what basic elements a piece of music can actually survive on before it completely dissolves into the ether. But at times it goes a step further than simply seeing how far something can bend before a break. Garwood stakes his interest in the post-mortem, fingering the broken shards lying on the floor and analysing the pattern that forms upon destruction to see what can be created anew. Recorded within a ‘vast deserted house that was as much building site as abode’, it’s a record that broadly deals in guttural and broken country blues with intermittent bursts of spidery jazz, but generic elements don’t fill out the whole, with added layers of discordant rhythm, found instruments, sneezes, creaks, bumps and the tenebrous atmosphere all coming together to form hypnotic textures of trance-like noise.

It begins conventionally enough, with 'May I Rumble' serving up Garwood’s tar-thick quiver against a wandering, finger-picked delta blues amble. 'Mellow Trucker Lady' then sets down a smooth, restful groove before things begin to break down on 'I Bared My Chest', the rhythm driven by a low, chant-like murmur, clicking fingers, an icy Overlook Hotel reception bell and the whoosh of blade slicing through air. It continues in this sparse, at times anaemic, fashion, with Garwood for the most part barely raising his voice above a whisper, making it hard to take in anything but snatches of opaque lyrical repetition here and there. "Strong for the night time then I’ll be/ strong for the night time then I’ll be". The album closes with the ceremonial 'The Sand That Falls', where the looming drums and crashing cymbals play out against an enveloping, insidious hum, building and building until suddenly, it breaks, and then stops completely.

The Sand That Falls is a tough record to penetrate early on and at times it can be a frustrating, obdurate listen. If you’re going to investigate, see it as a one-sided relationship where attention can never waver as you listen intently. Don’t expect it to come calling from across the room as you thumb through a magazine or weigh up the days events. Headphones and a darkened room or a blank, open landscape are pretty much a necessity if you’re going to lock the rhythm of your head to the rhythm of the record. It’s also an album that could benefit from a break in the tone to provide a little light alongside the dark. Like Waits, Garwood has shown in the past he is capable of producing songs with a cracked and fragile splendour, and a thin beautiful melody somewhere along the way might have provided a moment of interesting contrast. But then, for all its faults, if The Sand That Falls catches you right and you allow the atmosphere to swell up and sweep around you, it can be a truly startling record. Like a dream, a lucid head and the wrong context will likely leave you irritated and tripping over yourself to comprehend it all. But in a murky half-light and slipping away with the hypnotic rhythms, it’s fully capable of swallowing you whole.