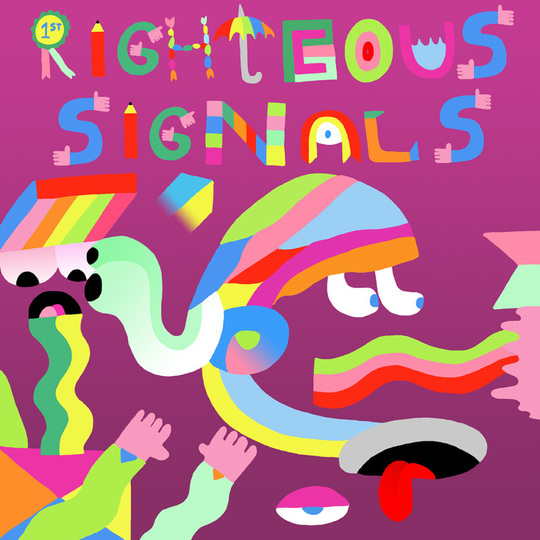 If Gay Against You became a very big band, chances are it would mean – well, chances are it would mean that brain-melting shit had permeated the air and that we should have listened to those chemtrails conspiracy theorists all along. But what it would also mean is that Lachlann Rattray and Joseph Howe would have their pasts dug up and their associates grilled by gimlet-eyed tabloid weasels. What’s the origin of their peculiar approach to portraying ‘gayness’? Is their portrayal of ‘gayness’ even supposed to be representative of gay culture, given that this isn’t generally defined by wearing one’s PE kit, throwing cardboard boxes into the audience or playing gruesomely neon-toned consolecore? Is this more a case of the duo wishing to have their cake and eat it in a manner summed up by the lyrics of the Bloodhound Gang song ‘I Wish I Was Queer So I Could Get Chicks’? When you used to playfight as kids, did it ever, you know… get out of hand?

The one time I saw G.A.Y. play live, it was in Cardiff and, by chance or otherwise, was on the same day as the Mardi Gras in the park down the road. Whilst I would be hesitant of telling the gay community who they should or shouldn’t book for their own festival, it was hard to get behind the notion that Big Brovaz were the event’s obvious flagship band – yet there they were, in the rain, clinging on to a semblance of a career. G.A.Y. were under a roof being sweaty and jumpy and childish in a manner that compelled near enough everyone present to join in. It was pretty great. Sort of what two primary school-age kids might imagine a gay club was like, based on reading about it once. All this extraneous bumph does tend to overshadow the band’s actual music, though; I make no apologies for talking about their image and antics first, as they’re pretty upfront in their aesthetic, but Righteous Signals, Sour Dudes, their second album, isn’t half bad.

As much as this is some serious narcissism of small differences biz, musically they have become slightly more… mature since their 2006 debut Muscle Milk. It’s still a high-pitched, rushy gaggle of digital technicolor yawns, but there’s some lush analogue (-sounding?) synth action which may be half-expected by anyone who’s seen or heard Ben Butler And Mousepad, Joseph’s newish sideproject which is largely based around twisted, almost jazz-funk-sounding keyboards. There are still breakbeats scattered through Righteous Signals...’ 15 tracks, but they are rarely too outrageous in their ferocity or velocity, and suggest that the obsession that has consumed many young men this decade – that of trying to figure out exactly how Venetian Snares makes music so brisk, yet contains some kind of structure – has been a fleeting one for G.A.Y.

They don’t really sound like a punk band anymore, either: their old jams seemed to exhibit some Locust and Melt-Banana fandom, sliced to ribbons and played without a guitar even in the BUILDING (probably). These days they tend to intone their vocals rather than shout them, and there’s a fair old whack of psychedelia embedded in their spirit. ‘Unit II’’s keyboards are sort of redolent of ‘You Can Call Me Al’ in their glossy Eighties pomp; ‘Glorious Dawn’ rhymes 'Satan' with 'bacon' and could, at least for its first half, fit into the amusingly spurious genre of ‘hypnagogic pop’ that The Wire's David Keenan invented the other week.

In fact, you know what songs like ‘Cruisin’’, ‘Victory Quix’ and ‘Leg Of Lamb Of God’ (titter) just started reminding me of? Merriweather Post Pavilion is what – I mean, Lachlann and Joseph will probably think this is furiously off-base and that I shouldn’t be allowed to listen to, much less review, their music, but Gay Against You and Animal Collective both use consciously modern equipment to transmit a desire of finding a world, or a headspace, where people are consistently rad to each other and it’s possible to exist in a permanent state of semi-curdled fogginess and still land on your feet. One band present this in the manner of a tarted-up Beach Boys, and one in the manner of a chiptune-gabba aerobics class soundtrack, but in 2009 they’ve both pushed my pleasure buttons in pretty much the same way. Not that I’m suggesting they’re into that kind of thing, really.