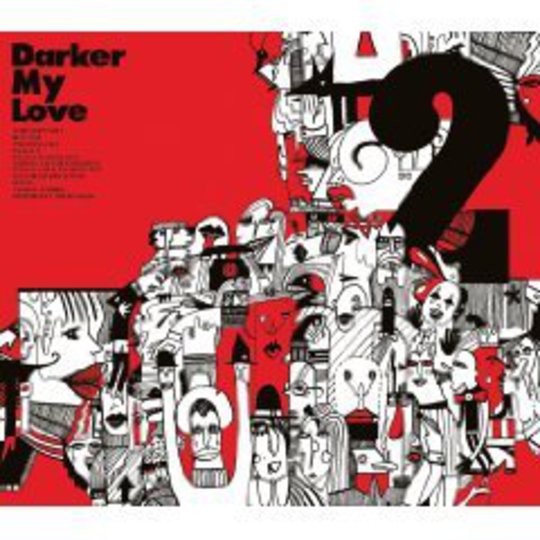 For the record, Darker My Love don't sound much like Can either.

We probably shouldn't take a statement off Wikipedia so much to heart, least of all when it's missing a citation. However, if you absolutely must compare Darker My Love to droners of yore, I'd suggest the Telescopes as a slightly more accurate frame of reference - but only slightly.

2 is Darker My Love's sixth album. Nah, I jest, it's their second. But it would've been cool if it was their sixth and they only named it 2 to confuse people. Sort of like Blur and 13. It opens with 'Northern Soul' - not the Verve song, but vaguely like the Verve song. It carries a similar density to its namesake, but is thinned by sharper guitars and treated vocals. However, listen to the "come on..." of the chorus and tell me that it doesn't sound like the "I'm alive..." of the Verve's variant.

'Northern Soul' morphs smoothly into its successor, the similarly confusing 'Blue Day.' Not the Slowdive song and this time nothing like the Slowdive song. This one features a stammering guitar and has a muffled keyboard echoing the cooed choral "Bloooooo dayyyyy" like an empathetic Basset Hound. The tie-dyed Sixties thread you could sense in the first track is clearly visible in this one’s wah-wah-ness.

Ok, here's what I'd like you to do: think of Supergrass and the opening verse of 'Alright'. Alright? Now reduce the minimalism, swap keyboard for guitar and replace the lyrics with "first I'm here/then I'm there/and I know/it's a drag". Congratulations, you have managed to create an accurate impression of the opening of 'Two Ways Out' – the song chosen to represent the album in single form. Surely there were more original options?

Maybe not - 'Add One To The Other' is a return to the Harrison-Morrison Sixties. A slow-burner of a sitar and a subdued guitar and keys that build up gradually, ever so gradually, 'til the vocals kick in halfway through the song. Said vox are made up of precisely two lines of lyrics and a repeat-ad-infinitum mantra in the form of the deeply meaningful phrase "yeah-yeah." The chant halts and you realise you are no longer in that initial state of meditation; far from it, the music is now rolling frenetically and not keeping an eye out for what is in its path, resulting in a violent collision with the gentle coos that introduce the next track. 'Even In Your Lightest Day' is a song with a vocal melody the Beatles could have concocted but with music straight off Pearl Jam's 'Oceans' - a forgettable track, no doubt, but not quite that forgettable. Evildoings continue on 'All The Hurry And Wait' where a string section disguises some very familiar chords. Why are these familiar chords so familiar? Ah, wait - that is 'Bitter Sweet Symphony' that is (...or 'The Last Time' if you're a Stones supporter.)

Fortunately, I can’t spot any blatant thievery on the last two tracks. ‘Talking Words’ buzzes pleasantly and contains lyrics that make little sense outside of the apt lines "you got me talking words, you got me meaning less." Meanwhile, ‘Immediate Undertaking’ is a throbbing choir-y lullaby with reference to ladders, time and people falling down steep abyss-like things.

It’s a comfortable album, this one – it’s easy on the ears. But that could be because of the myriad of familiar influences that constitute it: Sixties psychedelia, a smidgen of Spacemen 3 and the Stone Roses in the early tracks, harmonics reminiscent of CSN(Y) and/or the Fleet Foxes, bits of Slowdive and the Telescopes and little snippets of sound throughout that you know you’ve heard before but you just can’t place.

Inspite of that, MBV and Can are nowhere to be found.