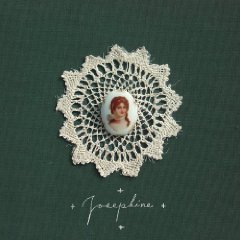 Solo, or as Songs:Ohia, Jason Molina has put out stunning records every years since 1996. The death of a Magnolia Electric Co. member threw Molina and his band, though, but after a respectful year of silence, they've carried on, with Josephine as the first result. »

about halfway through magnolia electric co's latest long player, 'josephine', there is a noticeable shift in weight. it's a release of some sort - the kind that comes when you give up holding back the tears. it's a heavy kind of freedom coming to the forefront, an empowering sadness. and when chief electrician jason molina delivers the line "an hour glass... filled with tears and twilight from a friend's dying day," the mood becomes clear. the band is back on its heels, yes, but they are going to fight back in the only way they know how. molina's concept album is an honest-to-god effort on the part of magnolia electric co. to pay tribute to the life and spirit of fallen bassist evan farrell (rip december 2007), as the ideas for 'josephine' were being pieced together. molina said each tune is a good faith attempt to make real evan's hopes for the record. and in doing so, evan's spirit becomes part of the concept. the loss of 'josephine' becomes the loss of evan. molina's familiar lyrical allegories are still in tact. but here, in what is no doubt the strongest set of songs molina has written since the inception of magnolia electric co, those classic themes take on new meanings. molina has approached the universal loneliness before, but never in such a focused, directed manner as found on 'josephine'. molina, magnolia electric co and legendary recording engineer steve albini have put it all to heart. the album is also an experiment in molina's songcraft, introducing some real lessons in brevity as he whittles a handful of tracks into well-under three minutes. there are cues taken from great songwriters like willie nelson and warren zevon, ie the horn section throughout the record and the especially the sax solo on the zevon-esque lead track 'o! grace,' or the doo-wop leanings found in 'rock of ages.' the album closer, 'an arrow in the gale,' acknowledges that magnolia electric co. as the road warriors they have truly become, are still blazing the trail with the line "lightning on our tail, we better go, jo." evan farrell, jason molina and the band are on different journeys now - but maybe somehow, somewhere parallel. this is heartbreak at ten paces, to be sure.
description from www.roughtrade.com