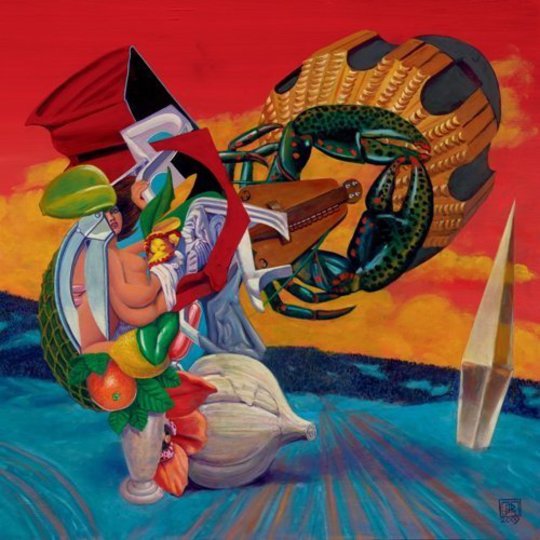 Behind closed doors, The Mars Volta are a playful, joke-cracking duo, quoting from their favourite British comedies – The League Of Gentlemen, The Mighty Boosh – and giggling about performing unspeakable acts on parental figures. The serious, straight-faced impression of Omar Rodriguez-Lopez and Cedric Bixler-Zavala is, mostly, a product of the media’s presentation of them: all promotional photography features the pair looking as if no amount of tickling under the armpit could have them crack a smile. But, that said, they’ve never, ever, not taken their art seriously – theirs is music that muddles and amazes in its complexity and depth.

Octahedron, the band’s fifth studio album, is their most immediate since startling 2003 debut De-Loused In The Comatorium, a record that took the more adventurous aspects of Cedric and Omar’s At The Drive-In arrangements and expanded the nuances into a glorious, dizzying collection of bombastic exploration – prog-rock was reinvented with a single record. Since then, The Mars Volta have refused to wholly replicate their past form, each album a distinct development whether it be regarded as a positive move or not. Looking back today, Octahedron’s immediate predecessor, 2008’s The Bedlam In Goliath, was a confused piece, uncertain of its approach angle and therefore burning up in the outer layers of certain punters’ perceptions. In contrast, this new long-player displays a far greater sense of focus, even if it’s not always as instrumentally invigorating as fans might have hoped for.

The album opens with near enough a minute-thirty of silence, the slow-build dynamic of ‘Since We’ve Been Wrong’ promoting the pronounced balance between loud and quiet elements throughout Octahedron; this is not an album that’s been compressed to death for shopping centre consumption, instead echoing the warmth of influential records of the 1970s. Initial guitar work suggests this could be the band’s promised take on the acoustic album – “It’s our version of what we consider an acoustic album,” Cedric told Spin ahead of release – but that impression is soon dashed by the detailed fret-work of ‘Teflon’, a track enhanced by the dramatic menace in Cedric’s vocals: “Let the wheels burn / Stack the tyres to the neck / With the body inside”. Conceptually, much of the lyrical content deals with kidnap, loss and longing, and such is the clarity of delivery that the listener soon finds a clear narrative to follow.

Standout track ‘Cotopaxi’ – the greatest three-and-a-half minutes that Led Zeppelin never wrote – reinforces the themes established earlier in the album: there are kids missing from their beds, and that can’t be right. “Don’t stop dragging the lake,” hollers Cedric, before declaring, plaintively: “You’d better keep looking for me”. One can’t help but think that, if the song’s title reflected its content rather than being named after a South American volcano, maybe The Mars Volta would go some way towards shaking the awkwardness that must surely put newcomers off – despite being their most (relatively) straightforward album yet, titles like ‘Halo Of Nembutals’ and ‘Luciforms’ don’t exactly scream accessibility.

An overall tone of melancholy, punctured only by the rolling percussion of ‘Cotopaxi’ and ‘Desperate Graves’, can give the impression of a slow-moving album, but there’s contrast enough between the highs and lows of Octahedron to encourage repeat listens – and with each play the record reveals new hooks and greater lyrical intrigue. Nothing is headache inducing in its structure, and Cedric’s singing has come on to the extent where he could perform for Simon Cowell and not get buzzed off after a few seconds – his contributions are alluringly smooth, and give Octahedron its sharpest pop edge. But certain passages do meander, and the contrast between sonic sprightliness and what feels like filler segues can trigger lapses of concentration. Production wise the album’s commendable in its analogue feel, which comes through on a decent system; but on a personal stereo its quieter moments get lost beneath the hubbub of city life.

If they’d only crack a smile in the studio once in a while, like they do when recalling scenes from their favourite (wickedly dark) comedies, who knows what The Mars Volta could achieve, as there are flashes of true brilliance on this LP that, with just a little more cultivating, could combine to comprise the band’s greatest album yet. But Octahedron lacks sparkle enough to raise it above previous creative highs – it’s a recommended affair, at times truly scintillating, but it doesn’t quite deliver to the extent where all caution can be tossed to the breeze. Still, at least it’s not an acoustic album. Imagine the horror.