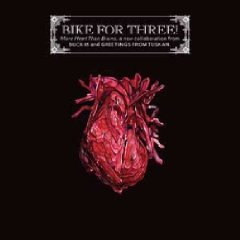 Bike for Three! are Richard Terfry (AKA Buck 65), taking a break from recording for Warner, and diving straight into a new collaboration with synth programmer Joelle Phuong Minh Le (AKA Greetings from Tuskan). »

anticon release a very special project. bike for three! is the mysterious cross-continental duo of canadian indie-rap legend richard terfry (buck 65) and budding belgian electronicist joelle phuong minh le (greetings from tuskan). shrouded in strange magic, anchored by the heavy stuff of life, and lifted by a mutual magnetism still uncharted, their music is a bright /stunning combination of downtempo textures, smart pop, and exposed lyrical bones. over 15 years, richard has carved out a corner of hiphop history by unraveling ornate and dust-caked yarns, often over beat-addled soundscapes, as on his seminal 'language arts' album series. for his last record, 2007's 'situation' (released on sage francis' strange famous label), the man crafted an entire song-cycle around the narrative minutiae of 1957-rich's love for a good story is famous. joelle was raised in brussels by her vietnamese mother, a painter and a chef. she has magic secrets - and perhaps a touch of clairvoyance - that she put to work
in creating 2006's striking greetings from tuskan lp debut, 'lullabies for the warriors'. to this day, there are details that even rich doesn't understand about joelle's immaculate productions. bike for three!'s constituent parts have never met in person, and they might not ever. she found him, and their story unfurls in real time along with their songs. joelle sends rich music; rich writes to the moods and movements that she's designed; joelle nurtures each piece into an animate whole. bike for three! actually finds buck 65 eschewing traditional narrative forms in favour of an intimate stream of consciousness (offset by tight rhyme cadence) that mines the craggier depths of romance both requited and out-of- reach, real and imagined (which perfectly befits bike for three!'s working relationship).
description from www.roughtrade.com