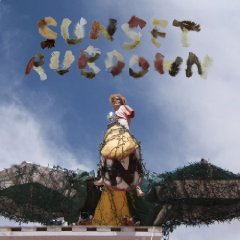 With Wolf Parade and Sunset Rubdown, Spencer Krug's been knocking-out albums that are instant album-of-the-year contenders. His heaviest - and most gorgeous - yet, Dragonslayer sounds like Warm Jets-era Eno pleasuring Bowie & Fripp to a fire-breathing climax. No, really... »

sunset rubdown was once the moniker under which spencer krug released low fidelity solo recordings. the project has long since evolved into a full band, and 'dragonslayer' is the third full-length recorded by the whole group. besides krug, it features the three musicians who originally signed on: jordan robson-cramer on drums, guitar and keys, michael doerksen on guitar and bass, and camilla wynne ingr on keys, percussion and vocals. and now, for the first time, newest member mark nicol can be heard on bass, drums, and percussion. sunset rubdown's previous release on jagjaguwar, 'random spirit lover', was a studio-built album, in that much of it was written while recording (built up in separate layers, with almost all the vocals needing to be overdubbed). with the new album, the band wanted to try something completely different. it was a very conscious decision, and not a 'natural progression.' the result is an album that feels honest, natural, and straightforward. the musicianship is left in the open, unassisted by studio magic, and the songs are left to justify for themselves their own screwy pop-rock existence. 'dragonslayer' was recorded in the fall of 2008. sunset rubdown hope that the true strength of this new album is a hidden complexity that emerges slowly from within the straight production and raw musicianship, and from what sounds at first to be an only slightly skewed approach to pop. they hope it's like that one friend of yours who looks unassuming and normal, but once you get to know him it's obvious he's basically crazy.
description from www.roughtrade.com