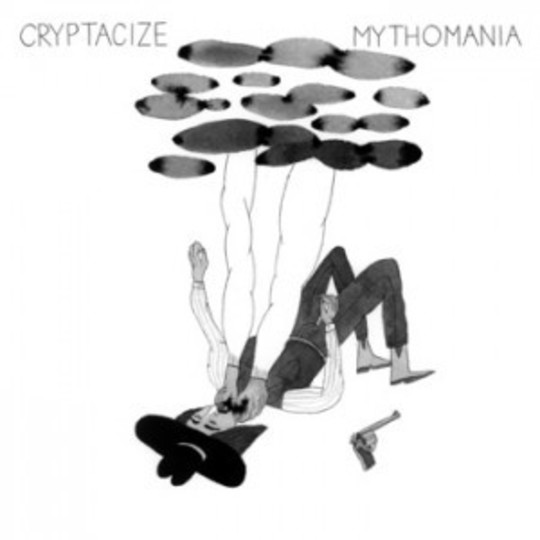 Almost definitely better known for his work as guitarist and bassist in Deerhoof - and to a lesser degree The Curtains - Cryptacize is Chris Cohen's 'other' band. A band with as much an eye on the present and future as the past is often prone to falling into the traps of both, but this lot are a band who mostly know their own sound and what to do with it, but not quite where to take it.

It all starts with a bump – 'Tail & Mane' easily the bumpiest thing on here as it clunks into gear – but struggles to pull itself up the hill at such a pace again. The influences which hold Mythomania together aren't ever far from the surface and are as plain as day is light. It's a record which has most of its brain in the Sixties. The guitar is more cutting than on your standard Sixties recreation fare, but Nedelle Torrisi's drenched-in-delay melodic dealings are perfect for this – almost every breath in and out is audible and her part is the one thing which maintains interest until well over half-way.

There's certainly more than a dusting of Springfield in Torrissi, and a sanding of Shaw. Anything after track five – 'The Loving Sun' – though, leaves ambivalence prone to take over as you quietly drifting there with the non Torrissi-led tracks. 'What You Can't See' is a yawn-inducingly dire slow drone which may be the longest 3:34 of your week.

By far the most interesting features are the weird, often percussive interjections which appear far too infrequently. Some of them sound like a tiny squeeze-box having a fit whilst jogging along a rocky pavement – 'One Block Wonder' – whilst others sounds like the could soundtrack to a clown's sweaty nightmare. The jagged – what, some might say 'angular' – works on the six-string are fodder in nature and sound for Torrisi. Mythomania is a piece of work it's easy to get lost in, but it's an ease of falling too quickly for its charms without looking too far into its soul. Of course this is no bad thing, but picking about the bones of a record often means you come out with less meat than you thought you had – something true here.

The reason why Mythomania struggles is because the opening exchanges of 'Tail & Main', 'Blue Tears' and the title track never threaten to be matched. It would probably be improved by around 20 per cent if Cohen never actually opened his mouth to sing. Unfortunately for all involved, he does. For a record which promises so much it ends up delivering too little, and has you scraping among scraps if you were to make an actual list of good songs on this record. It stands alone as an album which is well-rounded – there's not much here which is lacking in quality, but much is lacking oomph.