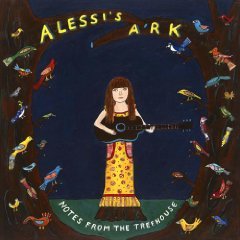 Alessi's Ark - Notes From The Treehouse

There is one important thing I need to get out of the way. And I blame this on my indolent contemporaries for having to say it, bu»

rough trade exclusice with a bonus four track ep featuring 3 new songs and a cover of lynrd skynrd. the tracks are produced by and feature ben lovett from mumford and sons. the wallets are hand stamped with a design by alessi. armed with spellbinding fairytales of magic, freckles, and asteroids, 18-year-old londoner alessi laurent-marke is set to cause quite a stir with her stunningly mature debut. leaving school at 16 to pursue a career in music is a brave move, but alessi's clutch of dreamy gcse compositions won over emi, who teamed her up with bright eyes' mike mogis to make this record. the production is as sensational as one would expect from mogis; haunting breathy vocals weave intricately between rich layers of orchestral strings and generous use of harps and violins, whereas the simpler vignettes such as 'constellations' allow alessi's curiously ethereal voice to shine over wistful keyboards. her voice seems to have found its distinct character; warm and bewitching it inevitably conjures associations with the likes of kate bush, joanna newsom, laura marling and cat power. however alessi stands out from the well-worn canvas of the folk-pop storytelling, inviting us into the enthralling and mystical realm where the mundane is turned into exquisitely crafted poetry. her songs are rooted relentlessly in the sensory worlds of fantasy and imagination, though she deals an expert hand in measured wistfulness, singing 'it's just a shame that from the very beginning you've always been her man'. showing maturity well beyond her short years, the playful and childish nature of the record should not demean her prodigious talent. alessi's ark is a serious contender for a place in your record collection. a highly deserving rough trade album of the week, 'notes from a treehouse' makes for a breathtaking gem of a record.
description from www.roughtrade.com