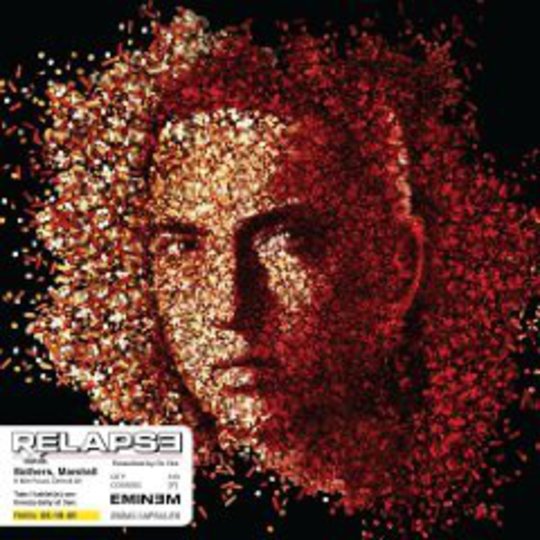 It’s probably safe to say we can give up now. If it were going to happen, Eminem’s long-awaited but as-yet-unrealised career-defining magnum opus surely would have arrived right now, at a juncture where the world’s premier white emcee is on the rebound from ‘exhaustion’ (drug problems) and a break from the game (rehabilitation), given further fire from the death of close pal Proof from D12.

The high hopes were there: the most pissed off rhymer in history about to channel his anger consistently; just maybe he’d reprise the underground rhyme skills that made his name in days when you’d find Marshal Mathers' moniker on independent rap bastions such as Rawkus, instead of doling out fart gags and open goal celebrity bashing with worrying frequency.

This time would be different. We hummed, fingers in ears, as Relapse’s previously leaked singles trickled into the public domain. Sure, the all-star platinum trio jam of ‘Crack A Bottle’, inviting Em’s long-time right hand men 50 Cent and Dr Dre to the party, trundles along nicely, albeit without ever testing comfort zones. And the chorus to ‘3am’ borrows parts of the brain that unconsciously play tunes in your head on repeat when least expected (best to ignore the weird Detroit-via-Afrikaans affection the serial killing Slim Shady adopts, though). On the flipside, ‘We Made You’ has put so many scores off Relapse it’s a wonder anybody still cares; a tawdry Em single by numbers, huge hit potential sabotaged by celeb chat that will date quicker than you can replicate the tiresome toilet noises that litter the track.

The writing is, largely, already on the wall for Relapse before its release. ‘My Mom’ continues slightly sarcastic accents, Mr Mathers declaring we must be sick of songs about his mother, failing to realise self-awareness doesn’t excuse contributions on the subject this phoned-in. Similar, besides shock value Mariah Carey jibes that inspired her husband’s well-documented ire, ‘Bagpipes From Baghdad’ is straight up unremarkable.

‘Hello’ is the first Shady classic of the album, showcasing a more natural, effortless flow, tapping his uncanny knack for mega hooks. Indeed, the refrain is so instantly memorable the standard drugs and (sexual) violence content matters little, with a Dre beat that bangs hard. It’s good to hear the former NWA star back on the mic for the aptly titled ‘Old Time’s Sake’ too, but the momentum is swiftly skewered, the record tailing off for an alarmingly attention-testing spell, suggesting squishing the best of Relapse and forthcoming follow-up Relapse 2 into a solitary record may have been wiser.

Ending with a flourish, the latest in a long line of ‘Steve Berman’ skits is an arched eyebrow within a self-referential piss-take, a curtain raiser to the closest Shady genuinely gets to hauling his carcass back to the underground (in that the final tune is entitled, erm, ‘Underground’). Contrary to the last, it’s a slick, wire-brushed blockbuster with Dre’s signature G-funk bubbling under dramatic gunshot-perforated sweeps that merely serves to leave a taste of what could have been.

Can you truly be crowned one of the greatest emcees of all time – and make no mistake, when on point Em is that and much more – without a hall of fame-worthy full-length? The question remains unanswered, because while it was, undeniably, dull without him, Relapse is less 12 steps than a stumbling one backwards.