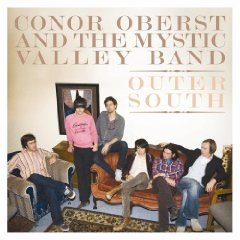 So, listen up and here’s the sketch: Bright Eyes is dead, long live The Mystic Valley Band. I mean, no announcement has been made or anything. But that’s the way it would seem. For now, at least. And frankly, it doesn’t actually matter, does it? Really? It’s still Conor Oberst and that’s all that anyone gives a flying hoot about.»

when conor oberst fled the mid-western winter for tepoztlan, mexico in early 2008, his plan was to record a collection of songs in beautiful surroundings with some friends. the band he put together for the recording sessions - all done in an adobe house half way up a mountain - was released last year as conor oberst, his first non-bright eyes release since 2001. the band then took to the road as conor oberst and the mystic valley band, named for valle mstico where the recording took place. while touring in support of conor oberst, the talented 6-piece began to write new songs, each band member sharing their compositions and working them out on the road. energized by the live performances, and eager to capture the synergy they felt onstage, oberst took his musical compadres to sonic ranch studios in tornillo, texas outside of el paso to capture these gems on tape. in recording sessions in november and december - the mystic valley band recorded 16 songs and this time they shared the songwriting. the result, the sparkling 'outer south' is the first album credited to conor oberst and the mystic valley band and features the fruits of their enticing musical symbiosis. oberst's songwriting and delivery remain an engaging presence, but the addition of songs by taylor hollingsworth (guitar), nik freitas (guitar) and jason boesel (drums) make for a multi-textured and colorful collaboration. along with oberst, hollingsworth, freitas and boesel, the mystic valley band includes macey taylor (bass) and nathaniel walcott (piano /keyboard).