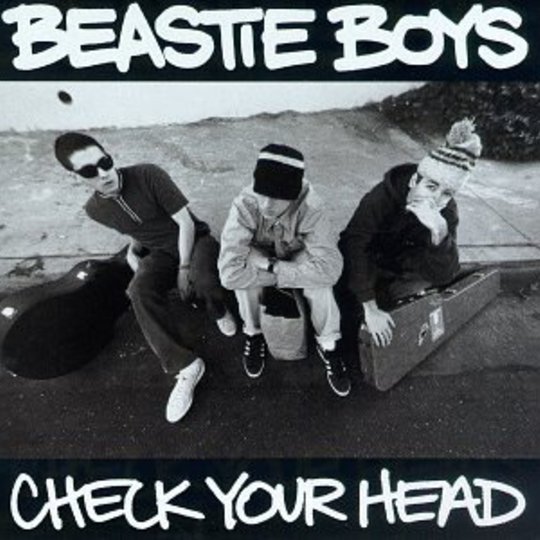 "Hear no evil, see no evil, talking no bullshit / so many damn people are so damn full of it / 'keyboard' Money Mark you know he ain't having it, just give him some wood and he'll build you a cabinet" should have been the Beastie Boys' tag-line for Check Your Head. The cover has Horovitz, Diamond and Yauch aping the three wise monkeys, and inside their rhymes had become altogether more focused ("it's still 1992 and no-one to vote for"). They also picked up their instruments again, albeit to an entirely different end to no-fi hardcore, and hired 'Money' Mark Nishita to bring the funk on keys.

Having already given the feel-good, sample-fest '80s masterpiece that is Paul's Boutique a remastered reissue, their 1992 follow-up has now been given the same treatment. Check Your Head marked a period of self-determination for the trio. Recorded at their own purpose-built G-Son studios and released under the banner of their newly formed Grand Royal label, it was an example of a band taking a risk following both the critical success but relative "commercial failure" of their second LP.

Musically speaking, it's clear that this record also represented a step – if not a full hop, skip and jump – in another direction, the band having already passed through hardcore and protogenic sample-laden hip-hop phases. Paul's Boutique was an eclectic mixing-pot of samples and pop-culture references.Check Your Head was cut from the same cloth too, albeit a differently shaped one. The adolescent tomfoolery embodied in tracks like 'Egg Man' is cracked and discarded, replaced with more wicky-wah-wicky-wah guitar and slow-groove basslines than Mike D could shake his sticks at. Though the use of samples in Paul's Boutique was innovative, there's no doubt that the dollar bill played a part in it being toned down on the follow up. The legal wrangling with the Hendrix estate for 'Jimmy James' (which was eventually given permission on the eve of the release) highlighted the difficulties many hip-hop artists faced in clearing samples.

It's probably for the above reasons, that their third full-length balances precariously on a confusion of forms and flavours, though there's somehow a glue which makes it all stick – "rhymes guaranteed like UHU*", maybe? Take the run from tracks 7 to 11, for example: In 'So What'cha Want' you've got the distorted, throaty vocals and thumping, grimey, trebley beats that would come to characterise their opus, Ill Communication, spattered with infrequent guitar caterwauls. Following, is the almost melodious half-minute interlude of Biz Markie's paralytic slurring over Ted Nugent on 'The Biz vs. The Nuge'. Then comes the 110-second hardcore blitz of drums, fuzzed-up bass, crunching power chord punk-rock-out of 'Time For Livin'', and the serene yet plinky-plonky slow jam of 'Something's Got To Give'. You almost have the B Boys' careers in a nutshell, right there. They even managed to combine the new instrumental direction with cutting lyrical flows on 'Live At P.J's'; the finest fusion, cowbell included.

Yet, for all the seminal, ground-breaking hip-hop, give them their musical tools and there's a chemistry which has produced at least one of the greatest rock songs of all time. 'Gratitude' perhaps lies only second to 'Sabotage' among the rockin'-est, drilling a snarling fuzzed-to-the-max bassline forcefully into each ear before thrusting it into your temporal lobes.

If there's one characteristic which marks the Beastie Boys out above and beyond their peers, it's their propensity to produce absolute tuuunes, vernacularly speaking. To The 5 Boroughs excepted, on every album there's a sack after sack of material marked 'Grade A'. Maybe this is why the Beastie's B-sides are always such fun; it's the appeal of the imperfect, and the opportunity to see those otherwise rare rough(er) diamonds. Bearing this in mind, there's the danger that you get an album of two-thirds shit hot, one-third shit. Though surely nobody would argue that tracks like 'In 3s', 'Namaste' and 'Groove Holmes' are anywhere close to the upper ranks, they do a fine job of creating another emphasis amongst and aside from flowin' prose. The In Sound From Way Out! and The Mix-Up show the relative impotence of such ventures but the small dose of instrumentals here never fail to engage.

Efforts before and since the holy trinity of Paul's, Check, and Ill Communication have been arguably of a lesser quality but they represent an almighty evolution from semi frat-boy rap to purveyors of intelligent and avant-garde hip-hop. Let's not forget the often meditational but sometimes psyched-up grooves, either. The boys just never looked back after this. Paul's Boutique may have been the standard setter for the Beastie Boys, but this was the tone setter. Despite being sandwiched between two records of greater substance in different styles, it marked out the B Boys as the multi-dimensional platinum-selling superstars that they became, and remain.