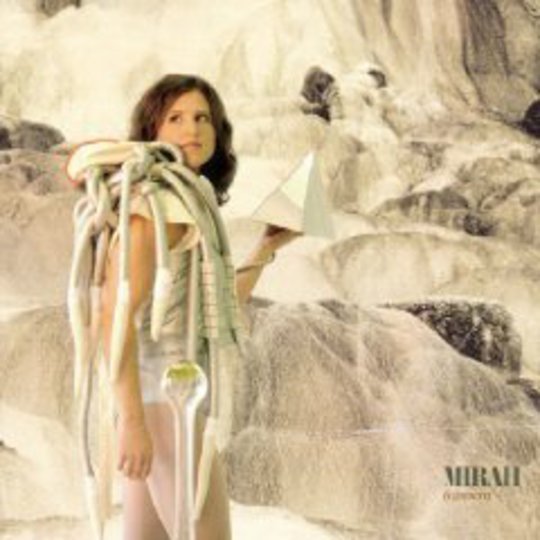 Following three solo albums, a host of collaborations and a four-year hiatus which saw both remix and rarities collections drop, Mirah Yom Tov Zeitlyn returns with a fourth set as striking as anything she’s ever released – a seamless integration of emotional peaks and troughs of the sort she’s spent a career exploring.

Immediately apparent upon spinning (a)spera a first time is the sense of ambition on display. ‘Generosity’ – all stabbing, swooping strings, spacious percussion and myriad vocal lines – is a startling, addictive entrée that in a sense recalls her earlier ‘Cold Cold Water’; dramatic, multifaceted arrangements playing out their circular routes married to dreamily seductive yet commanding vocal turns. Amid a dizzying swell of instrumentation she might as well be whispering these musings into your auditory canal, such is their disarming nature.

This kind of piercing intimacy is something followers of the K Records stable will be familiar with. Indeed, regular collaborator and Microphone / Mt. Eerie chap Phil Elverum is among the supporting cast gracing this sundry, perfectly formed record, which reacts against its calling card with effectual lo-fi hiss on ‘The World Is Falling’ before opening things up via crests of shimmering guitar on standout ‘Education’.

Hereon in, Mirah sets herself atop mandinka harp (courtesy of the astonishing Kane Mathis) in ‘Shells’, Eastern European carnival swing (the beguiling ‘Country Of The Future’), and smoky jazz-club lilt (‘Gone Are The Days’). That the album flows in the slightest is commendable – that it hangs together so rewardingly is directly attributable to its creator’s unique presence. Bequeathed with an innate melodic touch, in (a)spera she unifies disparate styles in a playful manner entirely her own.

This, then, is pop music at its most cerebral, though it never loses sight of its primary function – offering boundless return at minimal investment. Interestingly, there are songs here entitled ‘The Forest’ and ‘The River’, reflecting Feist’s The Reminder of two years ago, where ‘The Water’ succeeded ‘The Park’ in a masterful one-two of hushed sentiment. The comparison is apt: both records brim with hooks, are carried by expressive female tones of a similarly assured nature and revel in the gentle subversion of classic pop structures.

Curtain call ‘While We Have The Sun’ is particularly beautiful, where marimbas are dappled and backing vocals soar over a whirring, propulsive backdrop. Poignancy is ratcheted up to lump-in-throat levels, the song’s closing verses both a celebration and relinquishment of life’s fleeting nature:

Presumably a nod towards the play-on-words of its title – where ‘a spera’ and ‘asperak’ translate from the Latin to ‘hope’ and ‘hardship’ respectively – it’s indicative of the dichotomies embraced throughout (a)spera, a milieu where graceful vocals harness muscular themes, eclecticism is offset by unity, and languor with a keen sense of vitality. In what’s proved a tremendous year for female singers thus far (see releases from Marissa Nadler, Bat For Lashes, Emmy The Great and fellow Portlander Laura Gibson), this is yet another to add to the pile.