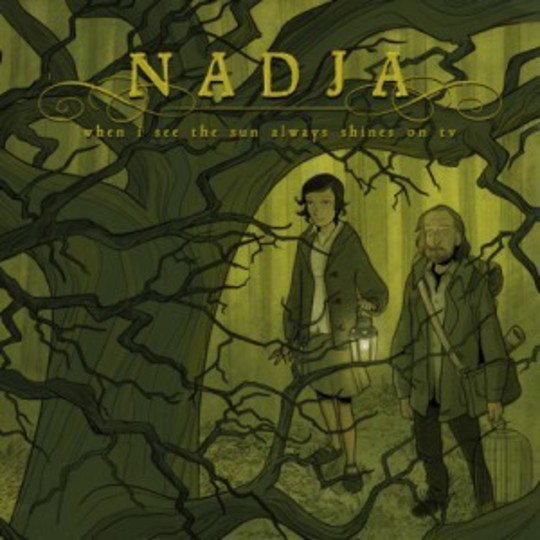 2008 was Nadja's year... in this little corner of the world. In a year of ever-decreasing physical purchases, and ever-increasing optimism about music-as-art (Yes, really), Nadja were one of a handful of bands who gave me the thrill of tracking down some beautifully – or charmingly – packaged records, and leafing through import magazines (Under the Radar, Skyscraper) for the interviews that first brought them to my attention. Hey, I even bought the T-shirt. Maybe it’s the idea of a male-female duo playing extreme music together; maybe it’s the sense of post-rock having reached a plateau; or maybe this is just the best development in (ambient) music since Cluster met Eno... or (in metal) since The Melvins decided they really hate their audience.

Briefly, Nadja carve out great slabs of sound, throbbing and trudging to melodic resolution with incredible slowness, over an entire side of vinyl at a time; you want to say “tectonic” and “chthonian” but not “glacial” because the fuzz-bass is so warm, rising through your feet, and the layered drones are so disorienting. In 2008, the Canadian duo re-worked their early CD-Rs with a drummer, gushed out some collaborations (in rust, scab, or verdigris sleeved vinyl), produced an album of manipulated Classical music (in the style of Eno’s Discreet Music or Bazinski’s Disintegration Loops), and most importantly, tied one hand behind their backs and still produced a masterpiece of ambient-metal, namely Desire in Uneasiness, which sees both Aidan and Leah playing bass, without a six-string in sight.

On their first album to feature vocals throughout, Nadja cannily bring the dual-bass and drone treatment to some slowcore and shoegazer classics, as well as 80s cheese and death metal, for a magnificent record that deserves to be their breakthrough. (I love Nadja, so I’m going to call this move “canny”, and not cynical, okay?) ‘Do you know how to waltz?’ by Low remains a valid reference point for most Nadja tracks, if you know the billowing, swirling epic from The Curtain Hits the Cast (1996). No, there’s nothing from the Slow + Quiet + Bass-Heavy American trio here, but When I See the Sun Always Shines on TV takes its title from Codeine’s ‘Pea’ (track 2) splurged with A-Ha’s 80s hit. Slowcore-geeks will remember that Low & Codeine were both on a Joy Division tribute, together, and you can see a Sparhawk-like sense of humour (and record collection) behind the track-listing:

Like any covers album that translates between genres, there’s an occasional sense of frustration or compromise... but that's "occasional" within tracks - there are no duds here. ‘Only Shallow’ makes perfect sense in context, because there was always that sense of hazy bliss to Nadja, although shedding a few of the grace notes makes it hard to appreciate the merits of the sludge-metal version on its own terms – you can't easily UN-hear the original, shimmering melody. ‘No Cure...’ is one of the best, sounding like Berlin’s ‘Take My Breath Away’, or indeed, The Sisters of Mercy's ‘Under the Gun’ - come to think of it, slowing down Slayer's thrash-metal makes it a dead-ringer for 'Valentine' from The Sisters' proto-industrial 'Reptile House' EP (1983). On the other hand, the synth-stabs of the A-Ha song become violently lurching bass, like falling off a cliff.

Having been an instrumental band so long, you wouldn't expect the vocals to add much, but it's one more layer to process, sample and cut up, the final half-second of each word snipped off, to swoop around the main vocal like tentative notes on a flute... or the ghosts of failed communications drifting into the distance, beneath the glowering thunderclouds of fuzz-bass... the plague of locusts approaching... whatever you make of it. Generally, Aidan has a more subtle voice than Michael Gira (of Swans) or Robert Smith, well-suited to their songs, and coming closest to the original on Codeine’s ‘Pea’, an ambivalent song of hope and revenge ( "when I see the sun / I hope it shines on everyone / well... almost everyone...").

Presumably Aidan’s no stranger to melancholy, but the vocals aren't quite depressed or depressive – more like a conspiratorial sharing of insights and epiphanies, amused by the absurdity of existence. Jury’s out on ‘Needle...’ – the verse-melody makes it an all-time favourite of moody artistic types, and Aidan nails it, but the Nadja treatment doesn’t really work for a chorus that needs to be urgent, and high. Still, ‘Long Dark 20s’ is awesome – at the Underworld gig last Autumn, Aidan dedicated it to “anyone who spent way too long in a van”. At the time, it sounded like a re-work of Nadja’s own ‘Slow Loss’; now, it sounds like - as promised on Nadja's nuclear holocaut-themed album - they really have "become Death, the destroyer of worlds".