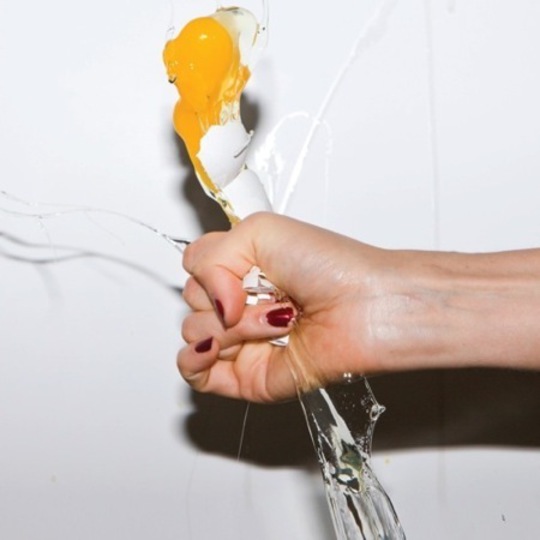 How do you stop everyone from saying that they love the remixes they've found on blogs more than they love the songs that you've slaved over in the studio? This is a conundrum which didn't really exist before the rise of the Hype Machine but, clearly, it's now at the forefront of some of our favourite bands' minds. Everyone from Biffy Clyro to Editors are threatening to go "a bit New Order" on their next records, whilst Patrick Wolf and These New Puritans could probably bang on for hours about Timbaland's beats.

Anyway, this brings us to the return of the Yeah Yeah Yeahs, perhaps the only noughties New York band who've not only managed to keep their credibility and cool but have also managed to keep on developing into the-band-of-a-generation.

Right from the off, It's Blitz! sounds like Karen O & co. have taken a nose dive into the synthy-disco-pop trough and crawled out out in awe of nuclear beats (feeling not unlike The Kills' Midnight Boom) and playing guitars like they're lazers (not unlike Muse-gone-Daft-Punk circa 'Super Massive Blackhole'). Opener 'Zero' is the call to arms of a band who desperately want to teleport the refugees of fashion-fizzled pop, the hippest of hipsters and the weirdest outsiders to the dancefloor of their sweaty spaceship. 'Zero' hauls us around in an intoxicating sea of electrical signals and is perhaps one of the band's finest moments ever committed to tape. This brave new art-disco twist on the Yeah Yeah Yeahs' blueprint seems to be solidified by the Knife-meets-Klaxons romp which follows ('Heads Will Roll'). Yet, for all this talk of transition to a world with pixelated surfaces, they still sound like the melodious aliens we've come to love.

Don't get me wrong, It's Blitz isn't some kind of neon-wearing nu rave knees-up, it's just that the opening pairing wrong-foots you before things drop down a notch. In fact, the body of this album is all about eerie slightness, riddled with moments of near-transcendental suppleness. Ballad and fan-favourite-in-waiting, 'Runaway' features a gigantic jittering string section and is perhaps the most epic moment of their career. Meanwhile, the album's highlight is the Twin-Peaksian 'Skeletons' which has a flickering 'All My Friends'-esque synth, coupled with huge distant drums with digital tears trickling all over it, garnished with vocals which find Karen at her most breathless.

Hardcore fans shouldn't worry though, this ain't no shitty 80s pop wannabe toss (see La Roux, Uffie, etc) and it still sounds like Karen O is the (arthouse) star, staring at the slanted horizon, dipping her hips and smokily/sex-noisedly going "oooh-wo-oooh", "'ock-'ock" and "ha-hur" rather a lot. Throughout this record Karen O walks the fine line between being the coolest woman in the world - the knowingly-sexy Weird Science-like indie dream woman - and yet you can also imagine her as some endearingly infatuated fan-mail sending Smiths/Cure/Blondie/Bowie obsessive, who makes music because it means so much to her. There's also still something wholesome and Bucking Bronco riding about Miss O, especially on 'Dull Life' which is pretty much YYYs-by-numbers in the way it teases before a tsunami of drums turn into some head-jolting waltz.

Whilst their earlier material may have been garage-rock rolling around on the floor with Les Savy Fav, It's Blitz finds them more concerned with filling the room, ensuring every pluck, whoosh and "ha-hur" matters. This isn't so much an Intimacy-esque departure - they haven't given up on the squalling space-rock of Show Your Bones - but rather, this is another leap forward. If anything, It's Blitz reveals just how much the trio have grown and how well they know exactly the strange angular planet that their music inhabits.